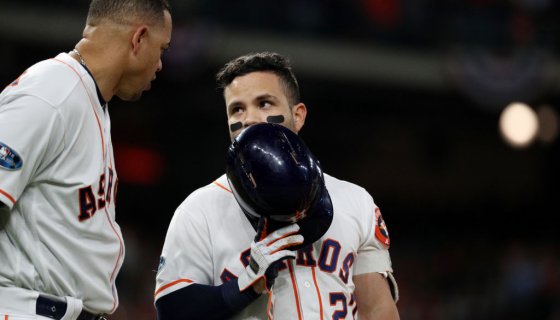 might be over, but there is another spicy sports documentary on the way.

LeBron James and his sports media company Uninterrupted are continuing the hammer out the content. It was announced that both entities will be teaming up with Quibi for a docuseries that will focus on the MLB’s darling cheaters, the Houston Astros. It will focus on the elaborate sign-stealing scheme that helped the team engineer one of the most impressive from worst to first turnarounds and winning one .

After they got caught, the Astros’ managers during the teams cheating exploits A.J. Hinch and Jeff Luhnow were fired, and the MLB fined the team $5 million. Most players, especially players who faced the Astros during those seasons, felt the punishment wasn’t enough.

Anyway, Julia Willoughby Nason and Jenner Furst will handle directorial duties and The Cinemart, the same production company that brought us the greatness that was Hulu’s doc are also on board. A description from Quibi about the doc that will do a deep dive on the scandal states:

“The documentary will transcend the baseball diamond to explore larger themes of greed, cheating, corruption, sportsmanship, and social media activism. Sign Language will be the definitive documentary about the scandal that rocked America’s pastime.”

We just hope LeBron James, who is a Yankees fan, doesn’t hold no punches and rips the Houston Astros and Boston Red Sox, who also got caught in the docuseries. They deserve it.