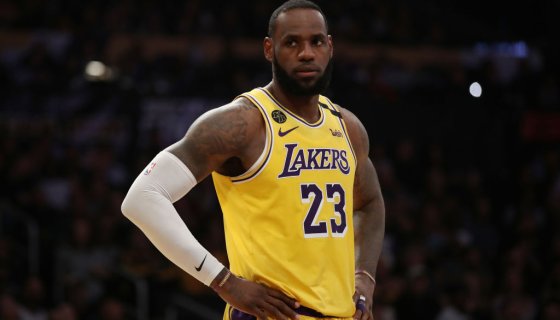 is as fit an athlete basketball fans have ever witnessed, but even the King likes to eat sweets occasionally. Fans took notice of the Los Angeles Lakers superstar snacking on red licorice twists after dropping 40 points.

The Lakers hosted the New Orleans Pelicans on Tuesday (Feb. 25) and with James and fellow NBA All-Star Anthony Davis leading the squad to a 118-109 win. The pair took on the high-scoring duo of Brandon Ingram and Zion Williamson, who scored 34 and 29 respectively.

After taking to the pine after his monster performance, a fan hands James a pack of Red Vines, which he casually ate as the game neared the end.  And as you’ll see later from the reactions, the Red Vines folks are loving the inadvertent endorsement of their candy, but Sour Patch Kids also made a bid to fill James’ candy-eating needs.

The moment even caused a slight debate among the Inside The NBA team from TNT after analyst Shaquille O’Neal suggested the white people refer to the candy as Red Vines while Black people call them Twizzlers. Just to be fair, they’re two different candies, as you’ll soon find out if you keep scrolling. But what’s got us having a good time with this story is the fact that no team nutritionist worth their salary would suggest candy as the proper post-game snack or meal.

The quick video of James nibbling on the Red Vines licorice twists definitely had folks chiming in with a load of comments, which we’ve collected below.

Everyone knows @TWIZZLERS are better 🤷‍♂️🤷‍♂️🤷‍♂️

.@KingJames if Red Vines can get you 40 points, imagine what we can do pic.twitter.com/NoVko0BMSK

I may be have to start liking LeBron because he favors my preferred brand of licorice.
I don't make the rules. #RedVines

LOL @KingJames got Red Vines and Twizzlers trending in the US! 🤣🤣 pic.twitter.com/x8Fx8gmqX5

Yo @KingJames, please just let us know whether they were Red Vines or Twizzler’s I really don’t want to see twitter blow up over this.

Imma mail him Twizzlers! @Hersheys we need connex with the @Lakers! We can’t let our mans eat an inferior product! @TWIZZLERS https://t.co/F4NjO7HYaa

the Red Vines PR team when they find out LeBron gave them free advertising pic.twitter.com/Njy9kdjTx4

Yo @SHAQ @DwyaneWade @Candace_Parker they are literally two different things. @RedVines are hard and @TWIZZLERS are softer and better. Twizzlers are Hollywood, red vines are country. pic.twitter.com/PXPGREUl1R