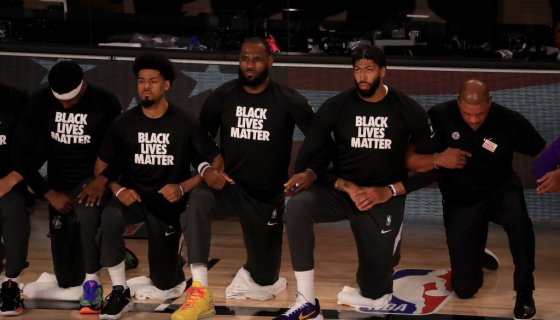 There were worries that when the NBA officially returns, it would be a distraction and take the focus away from social justice efforts and matters. During the first two official games of the restart, that was definitely not the case.

The , and we can’t front; it was refreshing to see. The league and its players didn’t miss a step either because both games delivered when it came to competitiveness. BUT honestly, everyone was wondering exactly how social justice matters would be tackled before the start of games.

Prior to tip-off of both the Pelicans vs. Jazz andLakers vs. Clippers games, during the national anthem, players, coaches, and even the officials all kneeled while locking arms in solidarity., who is one of the leagues most vocal players when it comes to social justice matters, vowed that there would be no let-up in the fight for justice and equality.

Coaches, players, and staff from the #Lakers & Clippers lock arms in unity during the national anthem. #WholeNewGame pic.twitter.com/ZZbCNYK6Ww

Following the Lakers’ victory in which LeBron delivered the game-winning bucket, he spoke on the night, adding that he hoped the players made proud by all kneeling.

“I hope we continue to make Kap proud. Every single day I hope I make him proud on how I live my life, not only on the basketball floor but off the floor.”

“Kap was someone who stood up when times weren’t comfortable when people didn’t understand, people refused to listen to what he was saying. If you go back and go look at any of his postgame interviews when he was talking about why he was kneeling, it had absolutely nothing to do with the flag. It had absolutely nothing to do with the soldiers, the men, and women that keep our land free.”
“He explained that, and the ears were closed, people never listened, they refused to listen, but I did.”
“A lot of people in the black community did listen, and we just thank him for him sacrificing everything that he did to put us in a position today, even years later, to be able to have that moment like we had tonight.”

Utah Jazz star Donovan Mitchell showed Bleacher Report’s Taylor Rooks a bulletproof vest to his game featuring the names of all the people who died at the hands of police officers.

Donovan Mitchell brought a bulletproof vest to the game with the names of numerous people killed by police.

"As African Americans…we're sick and tired of being afraid."

These actions follow the , using their interviews to keep the memory of alive and call for the arrest of the officers that gunned her down while executing a no-knock warrant. This is the type of energy we love to see, and all other professional sports leagues except the WNBA who have been about that life should be taking notes.