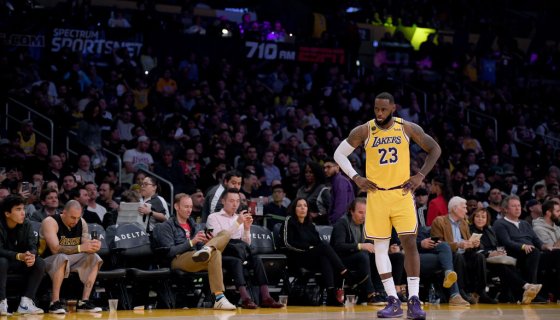 Shut up and dribble? We think not!

Much to the dismay of Laura Inghram, has been one of the sports world most vocal critics of not only “President” Donald “Bunker B*tch” Trump, but also the social injustices that continue to effect communities of color. Now he’s taking it upon himself to make sure that Black and Brown voters get a fair shake come election time in November and avoid the kind of f*ckery that went down in Georgia this past Tuesday where voter machines suddenly didn’t work and paper ballots weren’t available.

The New York Times is reporting that King James along with Trae Young, Skylar Diggins-Smith and Jalen Rose have decided to start up the More Than A Vote organization whose goal is to not only enroll new voters across the board, but also educate the Black community on the importance of their vote, voter suppression tactics used to keep them from voting, and how to properly fill out voting ballots.

Knowing that his iconic status can help get people to pay attention to the matter at hand, LeBron James is properly using his platform to help enact the kind of change desperately needed to save our democracy. Truth be told, this is what the game’s been missing as many of the sports stars we’ve revered over the past decades have hesitated to enter the fray of political opinion much less social justice. LeBron though is a man of the people. One of the many reasons he’s referred to as King James.

“I’m inspired by the likes of Muhammad Ali, I’m inspired by the Bill Russells and the Kareem Abdul-Jabbars, the Oscar Robertsons — those guys who stood when the times were even way worse than they are today,” Mr. James said. “Hopefully, someday down the line, people will recognize me not only for the way I approached the game of basketball, but the way I approached life as an African-American man.”

LeBron James may not be the GOAT in the eyes of many, but he can make a good case for being the Shepherd once it’s all said and done. Just sayin.’