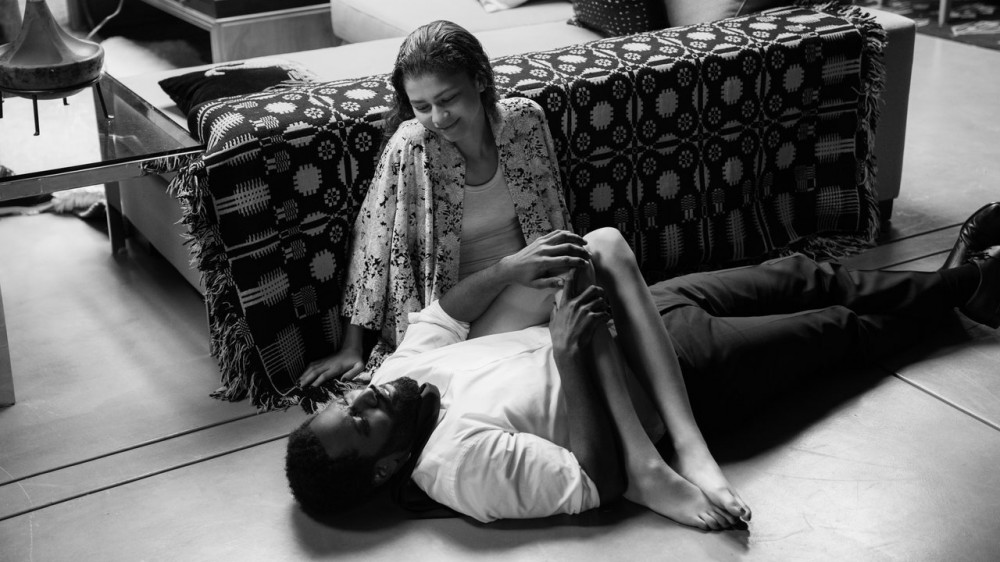 Today’s Netflix release of Sam Levinson’s drama, Malcolm and Marie, proves that even a pandemic can’t stand in the way of creativity. The Euphoria creator’s exploration of a couple at a crossroads in their relationship stars John David Washington as a director named Malcolm, and Zendaya as Marie, his significant other. On the evening of Malcolm’s film premiere, the couple get into an emotional sparring match. Raw, evocative, and shot in black and white, it’s reminiscent of George vs. Martha in Who’s Afraid of Virginia Woolf?, but its unfiltered take on romance was new territory for both stars. Particularly Zendaya, whose thoughtful portrayals have often centered on adolescent issues. Marie is volatile, sensual, and fully grown, all of which comes across onscreen thanks to the collaboration between Levinson, Zendaya, and her image architect Law Roach, who served as the project’s costume designer.

Though he and Zendaya recently celebrated their 10-year working anniversary, Roach had never styled her for the big screen. When presented with the chance, he didn’t hesitate. “I’ve done a little bit of everything with her; she’s my sister at this point,” says Roach. “The opportunities that she’s given me have been incredible, and I was flattered that she would invite me into this world. I knew Sam enjoyed my work, so the fact that they had a conversation about this was exciting.” The film also marked a new career phase for the actress, who served as producer. “She’s only 24 years old, but she was involved in every aspect of this movie from start to finish,” says Roach. “She took ownership, and that was beautiful for me to watch. I’m so proud of her progression as an actress and businesswoman.”

Given that the film takes place during a single evening, Law had to convey multiple moods through a succinct wardrobe. Washington stays chic in his Prada suiting while Zendaya moves from a slinky, metallic, halter-necked dress from Aliétte to a tank top and her undies, commanding her scenes in both. “Marie is a grown woman; she’s been through some things,” says Roach of the character’s personality. “She knows how to control her sex appeal, and she’s in control of her sensuality. She’s done a few things and has lived an entirely different life than Zendaya, so I did want to reflect that in the dress and the other things that she wears.”

To achieve this, Roach enlisted Aliétte designer Jason Rembert’s talents, whose self-assured designs have been worn by Issa Rae, Ciara, and Uzo Aduba. Rembert was Roach’s first and only choice, but the pandemic’s constraints meant everything had to happen virtually. “There was a lot of back and forth and a lot of shipping things,” explains Roach. “It was Jason and me on FaceTime at the fabric store and him making prototypes that were then sent to Sam for lighting tests, then those would have to be shipped back for alterations.” Communication with the team on set also took place online. “Did I miss the normalcy of being on set every day? Of course, but they were sending me dailies and sharing the process with me,” says Roach. “It was gratifying to be a part of everything.”

The jump to the big screen meant considering new things: namely, Marcell Rév’s moody cinematography, which utilized 16mm, black and white film to pay homage to the past while capturing the isolation of the couple’s secluded home. “The most important thing Sam kept reiterating was that the dress had to have movement,” says Roach. “That isn’t moving in the sense that it has to be flowy and chiffon; it’s about moving under the lights and coming alive in a way.” Levinson’s second request? Keep things classic. “Sam tasked me with creating a dress that was timeless and could stand with the other iconic dresses that we’ve seen in movies,” says Roach. “He said, ‘Law, when people see this 20 years from now, I want it to be still relevant.’ That was a tall order for someone who had never done costumes for a film before, but I think the Aliétte dress is exactly that.”

With his first film under his belt, Roach is already itching to try his hand at more costuming opportunities, or even give performance a try. “I’ve caught the acting bug,” he says with a laugh. “Maybe someone will want to put me in a movie. I definitely want to do more costumes though, I loved the research and just creating something original that [contributes] to a character’s development and telling a great story.”