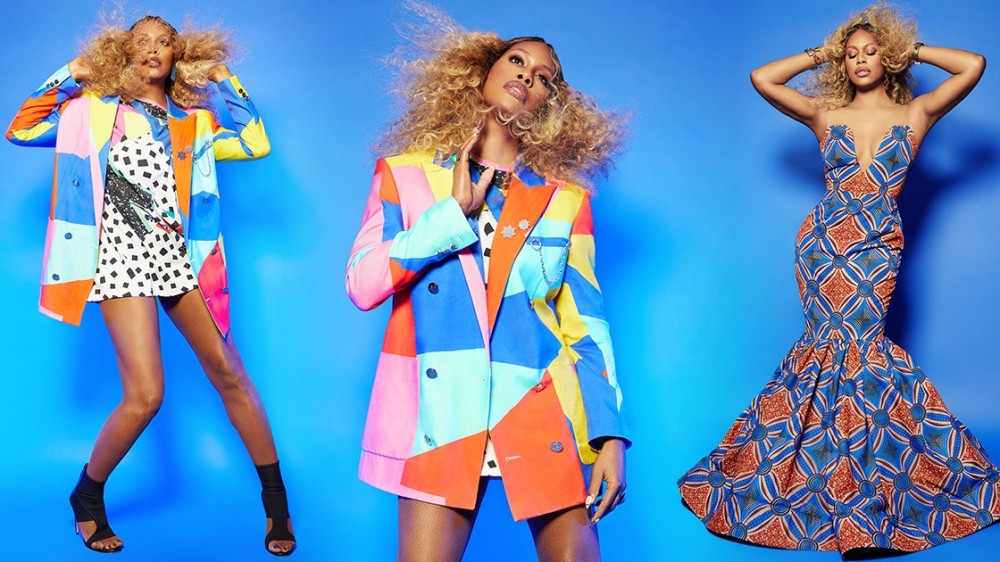 You can always rely on Laverne Cox to bring the glamour. The Promising Young Woman actor’s commitment to style has been evident from the very beginning of her career: Anyone who’s seen Cox work the red carpet or strut the runway during New York Fashion Week, as she did at 11 Honoré’s debut show back in 2019, understands the depth of Cox’s love for fashion. Still, last night at Essence’s Black Women in Hollywood Awards, she outdid herself.

Tapped to host the event virtually, Cox went all out with a bold series of looks created solely by Black designers. With the night serving as a tribute to the creativity of talent from the diaspora, Cox’s Essence wardrobe was among the night’s highlights. From the moment she stepped out in Lavie by CK’s arresting kente cloth gown, the audience knew they were in for a treat; but every few segments, she switched things up by debuting another standout runway piece. The changes left the crowd never knowing what to expect, which is precisely what Cox and her team had in mind. “I always want to push the boundaries,” shares Cox over the phone from Los Angeles. “I’ve been doing this for a while. People are used to seeing me a certain way, so we don’t want to do the same thing repeatedly. It’s all about staying creative.”

Inventiveness was the order of the day when Cox and her stylist Christina Pacelli began brainstorming looks for the event. “Hosting was such an honor for Laverne, and it was a privilege for me to be working on this as well,” says Pacelli. “When we found out that she’d be hosting, we wanted to celebrate the incredible Black talent in Hollywood and fashion. Essence said they would be fine if she did one look, but it’s Laverne! She is so glamorous, and we wanted to show all the different sides of that.”

To achieve that goal, the pair looked to fashion history, namely the iconic collections of Stephen Sprouse and John Galliano during his tenure at Christian Dior. “I did a lot of research,” admits Cox. “And we were working with concrete references.” A runway snapshot of the sculptural afros of Dior’s SS 2004 show inspired Cox’s hairstyles. At the same time, Sprouse’s punchy palette and graphic use of print led Cox and Pacelli to select a color-blocked blazer dress from Olivier Rousteing’s resort 2021 Balmain lineup. Together with hairstylist Kiyah Wright and makeup artist Keita Moore, they created several distinctive statements, the success of which Cox credits to her collaborators. “I trust their vision. I know what I want and like, but I’ve learned that you also have to let people do what they do best,” she explains. “You let artists come with their creativity and vision, then you all collaborate. I feel like we’ve got some awesome results, and it’s all due to that process.”

Given Essence’s history as the preeminent style publication for African American women, spotlighting Black talent was essential. The idea stemmed from Pacelli, who has been working hand in hand with designers for years to create custom looks for Cox. “I reached out to a lot of incredible people, some established and others who were newer,” she says. “We, of course, have the incredible pieces from Olivier at Balmain, but also independent designers like Claude at Lavie by CK, Samantha Black, Romeo Hunte, and more. Everything from the gowns to the jewelry by Matteo New York and Khiry was chosen to pay tribute to the spirit of the event.”

For Cox, the decision to showcase the work of Black designers was an easy one, especially given the support she’s received from the fashion community. “Because I am not a sample size, I haven’t always had access to certain brands, but we’ve received incredible encouragement from Black designers who have stepped in and done custom pieces,” she says. “I’m lucky to have a team attuned to all that is occurring in the world of fashion and so that we’re able to find and champion their work.”

Spotlighting Black excellence not only ties back to Essence’s mission statement, but also the message Cox wanted to communicate during a challenging year. “Optimism is a word Christina, and I thought of a lot when we were planning these looks,” she says. “This has always been one of my favorite events of the year, and every time I’ve gone, I’ve felt such inspiration and pride in being a Black woman. It’s such a beautiful and moving event, and we wanted to honor that.”

“The silhouette is just fantastic. A classic mermaid gown, but the print is just incredible. The look had this amazing fit, we tried it on, and it immediately worked, no alteration needed. If you have the right designer and the right design, all of a sudden, you have all these curves you didn’t realize you had! The print is so whimsical and vibrant that it just feels optimistic. As we’re beginning to come out of this pandemic and incredibly intense year, we [felt] we needed color, whimsy, and fun. That’s what inspired us to choose this specific print, and the silhouette is just divine; who wouldn’t want to look like that?”

“Again we have a multi-colored geometric print that is super joyful. The pink and orange jacket reminded me of Stephen Sprouse and the ’80s. I love the decade, and this feels like a gorgeous update on that look. This was our last look of the day, and it was just fun to show some leg and enjoy a different silhouette. Usually, the Essence Black Women in Hollywood awards are a luncheon, and you get to take advantage of the fact that it’s all during the day. With this, we nodded to how things were when we were able to do these awards in person.”

Sammy B and Romeo Hunte

“Years ago, Romeo made some of my favorite pants of all time, so I always look to him for beautiful designs. This Sammy B dress is all very ’70s, with that sense of fun and whimsy. I’ve never been someone who wears a ton of print, but something about this felt modern and relevant to what’s happening now in fashion. I love when clothes feel effortless, and there’s something about this that just feels easy and uncomplicated, like we’re not trying so hard. Particularly when it’s all paired with the denim on that double-breasted blazer.”