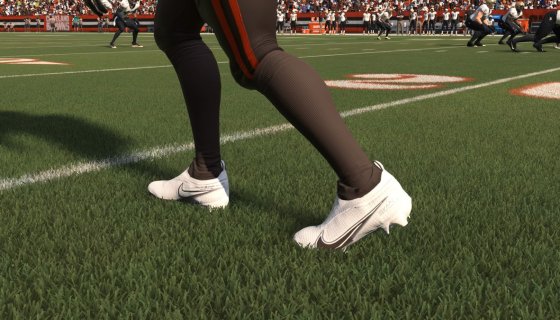 is literally just days away, and Madden NFL 20 is coming with a bevy of updates, most specifically a new shoe for players to sport on the field.

As part of the game’s latest title update, the Nike Vapor Edge — available now —  was added to the collection of in-game cleats for the NFL’s best to rock, and it’s not just a cosmetic update either. When the unique shoe is worn by certain Nike athletes like Christian McCaffrey, , Kyler Murray, Ezekiel Elliott, and Dalvin Cook, they will gain special boosts that will increase their speed and acceleration.

The addition of an aesthetic update that boosts the skills of certain players is a first for the Madden video game franchise. It also means that those rocking Nike gear gets a clear advantage over players who rock cleats from other brands like adidas, Under Armour, and Reebok. We don’t think gamers should be worried that those players listed above are gonna be unstoppable cause Madden developers favor balance when it comes to its game.

Speaking of Nike, you should see the exclusive they cooked up.

Back to the cleats, we won’t be shocked if Madden will do the same for the other cleat brands, not name Nike. This update followed the addition of to the game’s Superstar KO mode becoming the to grace Madden’s virtual football field.

Also shared today (Jan.31) was Madden’s annual Super Bowl prediction, giving the Kansas City Chiefs the Lombardi Trophy and naming Madden 20 cover boy, Patrick Mahomes, the MVP. If you’re a Chiefs fan, that’s a good omen because Madden has an excellent track record of picking the big game’s winner. BUT, did incorrectly pick the Rams over the Patriots last year, so there is still hope for 49ers’ fans.

You can check out the video provided by the good folks at EA Sports below.