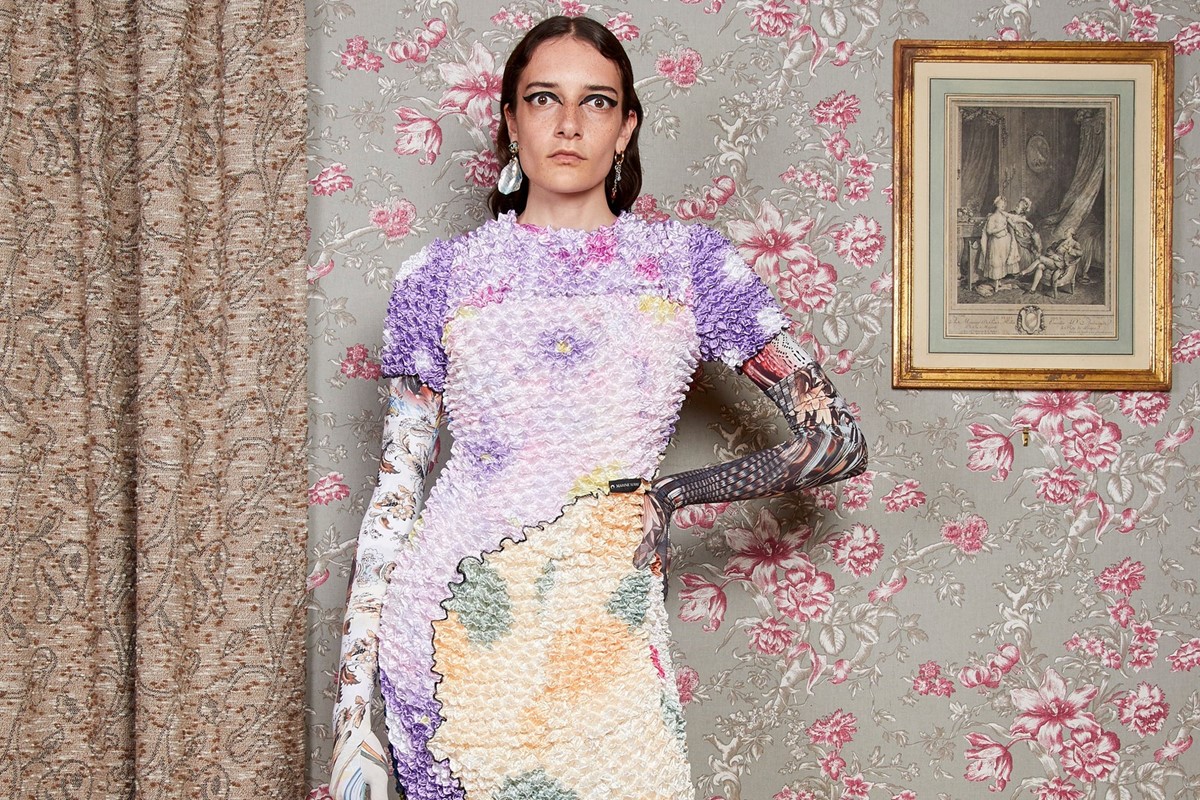 From Balenciaga and Ottolinger, to Chanel, Saint Laurent, and Raf Simons, here’s a rolling round-up of everything worth seeing from fashion month’s busiest pit stop

Lockdown was scary and boring but it did provide a moment’s pause from fashion’s hamster wheel. As we repeated the word “phygital” back and forth to each other, many heralded the beginning of a new system, citing the environmental and psychic slam of the seasonal calendar. In order for the industry to thrive, we had to downsize and do less. And though it may be too early to tell if anyone has actually taken heed of those conversations, Milan gave us more, more, and more.

Shows came supersized, staged concurrently across multiple locations, and with shiny collaborative spin-offs. They were bolshy, brilliant, and almost everything ran late as editors and buyers found themselves back in the crush of the fashion week traffic jam. The “new normal” remains a work in process. But if that sounds morose, then SS22 is all about the opposite. This season’s collections have been frivolous, sassy, and a little bit freaky. Next, and last up, is Paris. The bustling home of blockbuster brands like Balenciaga, Valentino, Raf Simons, and Chanel, flanked by emerging designers such as Marine Serre, Ottolinger, Ludovic de Saint Sernin and Botter. Below, we round-up the best in show from the last stop on this season’s voyage.

Christening Paris Fashion Week was Kenneth Ize, who presented a 30-piece collection aptly named New Dawn. It was playful and zingy, made up of technicolour checks, shimmery tassels, and vibration-raising, glitchy stripes. Though Naomi Campbell did not make a cameo this time around, there was a sense of levity, and fun, fizzing from the variegated apron skirts, tunic shirts, and tiger print vests that Ize put on show. Tinsel-like fringes swung from the hips of hot pink skirts, along the bodice of golden columns, and cascaded over giant, metallic beach bags. Yet while Ize’s offering was clearly energetic, it was by no means frenetic. As woozy notes spilled out of CKTRL’s saxophone, calm fell onto the venue, with the model’s walking in a deliberately slowed pace as if they had found peace, or at least content. Styled by Dazed’s IB Kamara, jollity was backed by craft – bright, panelled tailoring had been fashioned from traditional aso oke, handwoven in the factory Ize founded in Ilorin (Nigeria), as had a further 80 per cent of the collection.

This season, Marine Serre debuted her collection at film screening in Le Marais. Dubbed Ostal 24, Serre led viewers to a remote village with creepy, cult-like inhabitants. It’s crafts and rituals appear quaint – like covering cars in giant doilies – though they become increasingly eerie throughout the 13-minutes, eating oily black slop from beneath kitchen towels and bathing at dawn in blood-red liquid. The collection opens with homespun crocheted dresses and square-shaped shirts which look as though they have been fashioned from tablecloth, meanwhile necklaces have, actually, been strung together from teaspoons. All those pastoral rituals soon break into perversion, though, with head-to-toe morph suits (à la Leigh Bowery), tightly-belted, domineering leather coats, and pinch-and-twist, popcorn dresses. The Marine Serre moon seemed to eclipse this season, as she dialled down her use of the ubiquitous crescent, seeking to cement a recognisable language by way of reconstructed panelling and jaunty silhouettes. Most notable, however, is that 45 per cent of the materials Serre used were regenerated, with another 45 per cent also being recycled – the most the designer has ever used.

Titled Global Warming, Botter did little to decorate its message this season. Although Rushemy Botter and Lisi Herreburgh have always used fashion as a way to work through their climate anxieties – even setting up a coral reef farm during the pandemic – this week’s offering was the duo’s most concerted effort to date, having been forged from 60 per cent recycled plastic, collected in partnership with Parley For The Oceans. “This is modern luxury,” the partners wrote in their show notes, sending out a wave of aquatic blue, scuba-inspired tailoring, diving masks, and umbrella hats. It wasn’t easy to work with such rigid, recycled materials, but the Botter team felt it important to make the most of what they had, putting stiff fabrics through rigorous washes and experiments. As a result, rain jackets were fastened into umbrella-like silhouettes, while double-fastened jackets and snug gilets had came indebted to diving suits, made from spongey neoprene. With buoy-like handbags and fish-netted top layers, these marine-indebted accents could read like an easy gimmick, but Botter is pushing for longevity – both on and off the runway. Or should that be on and off dry land?

Maria Grazia Chiuri staged SS22 on a giant, absurdist board game, designed by Italian artist Anna Paparatti, who recreated her 1964 piece “Il Gioco del Nonsense”. Though Paparatti is practically unknown to the art scene, she was a central figure in Rome’s Pop Art movement during the 60s, and the 85-piece collection reflected that technicolour influence. Drop waist, 60s style block colour shifts opened the show, followed by skimpy Peter Pan collared suits, and a slew of babydoll dresses which had been finished with thick tangerine and verdant stripes. Looks which, in short, wouldn’t seem out of place in the archives of André Courrèges, Mary Quant, or Yves Saint Laurent. Then came a bevy of Muay Thai-inspired boxing looks with “Dior Vibe” branded across their waistband. A surprising transition, perhaps, but it didn’t have to make sense. After all, this was “Il Gioco del Nonsense” (the game of nonsense). After a brief interlude Chiuri closed with some Space Age, hard plastic bikinis, colourful, screen printed mini skirts – which somehow felt Warholian – and a smattering of sequined and long-beaded shifts.

Catsuits, enormous shoulders, and needle-point stilettos. Saint Laurent returned to the Eiffel Tower where models sloshed through artificial rain and strobe lighting wearing a block-hued collection inspired by the scandalous Paloma Piccasso – an old friend of and muse to Yves Saint Laurent. The result was brash and quite sexy, but in a power-suited, 80s kind of way, as opposed to the all the naive sensuality of the 00s which is dominating elsewhere. Clutch purses were shoved down waistbands like handguns, while triangular cocktail dresses and blazer jackets were decorated with gilded, coin-like buttons, cut at the forearm to suggest the Saint Laurent woman means business. Otherwise, most of the looks this season had been fashioned from spandex. Red, purple, and blue all-in-ones which were stretched, ruched, and bowed across the body, decorated with opulent gold cuffs and brassy costume jewellery. Vaccarello is unapologetic in his vision of rake-thin, high-stakes glamour, but it’s worth considering if that image is emboldening for all women.

Thebe Magugu brought his family to the proverbial Red Table this season, holding an installation of his collection at the Palais de Tokyo, while a roundtable discussion looped on TV screens in the background. As his mother and aunt sorted through a box of old photographs, the trio discussed the provenance of their outfits, which Magugu had translated into this season’s collection. A picture of his mother dressed in a colour-blocked 80s skirt-suit became a high-waisted, sculptural blazer, while his aunt’s penchant for mini dresses inspired a pair of buttock-grazing short-suits, and his grandmother’s nursing uniform was transformed into a hospital-blue, official-looking shirt-dress. Though the influence of these souvenirs were more literal at times  – a panelled kaftan had been printed with black and white photos – they were distinctly Magugu. For SS22, the designer’s signature military panels, bisected sleeves, knife-pleated skirts, and sculptural geles became tools to excavate and exalt the memories of his family.