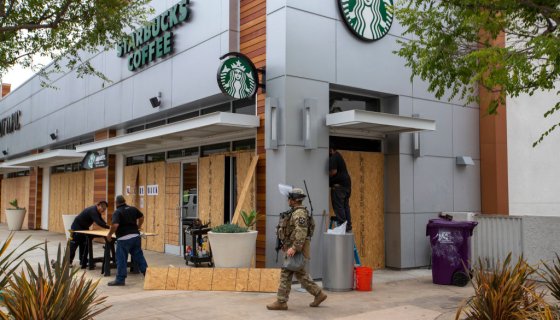 We’re not sure if a memo went out to police across the nation to accuse others of and coffee orders, but it’s beginning to look like it’s a thing now.

Just days after it was revealed that NYPD officers completely fabricated a “poisoning” at a Shake Shack in New York City, an LAPD officer is now accusing a Starbucks employee of adding a tampon to his frappuccino order. Raw Story is reporting that an off-duty Los Angeles police officer claims to have stopped by a Starbucks in a Target store to get himself a Frappuccino when he realized it came equipped with a woman’s “seal.”

Naturally the cop freaked out and was disgusted by the incident and now his brothers in blue are investigating the situation and gathering video evidence to corroborate his story.

“This disgusting assault on a police officer was carried out by someone with hatred in their heart and who lacks human decency,” said the Los Angeles Police Protective League in a statement. “We hope they are publicly exposed, fired, arrested, and prosecuted for their cowardly and repugnant actions.”

Women were quick to point out that the object in question was not in fact a tampon and everyone was quick to pounce on the cop in question for fabricating another situation in which a police officer plays victim for the sake of pity. Target has stated that they are investigating the incident and cooperating with authorities on the matter.

Even Vice tried to recreate the incident with a experiment of their own and it did not look anything like the picture the police officer in question posted.

Check out some of the more hilarious responses below and don’t be surprised when this turns out to be yet another hoax.

The funniest thing about the police tampon frappuccino story is that the Shake Shack poison story was fully debunked literally yesterday; it's like the cops waited and then said "well shit, that one's a bust, let's try this story!"

New rule: if you can't identify a tampon you probably shouldn't be allowed to have . With anyone.

I can’t believe y’all are making me dump a tampon in coffee this morning to reiterate that this is a hoax but it’s 2020 and what else is there?

Don’t forget the Cop/McMuffin meltdown last week in which Stacey/Karen was upset because they told her to wait for her food. She paid ahead of time. Dear lord. pic.twitter.com/1QffRE4LDw

That's why businesses need to start lawsuits against the cops.

Because otherwise it'll keep happening and they'll keep getting hit by backlash.