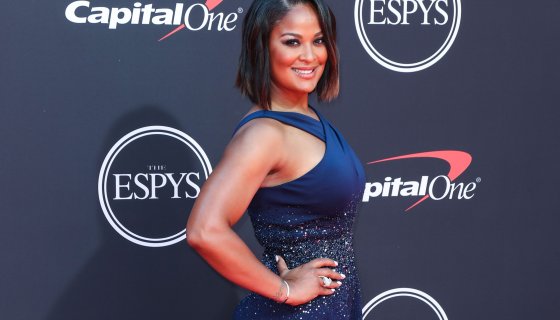 hasn’t fought for well over a decade and has since moved into other arenas as a businesswoman, wife, and mother, but it appears she might be ready to lace them up again. Ali has been noticing the chatter around current light and middleweight champion Claressa “T-Rex” Shields and said she’ll get back in the ring but only for the right number.

Sitting down with ESPN’s First Take crew, Ali, the daughter of the late, great Muhammad Ali, joined the panel as they discussed the upcoming fight between Deontay Wilder and Tyson Fury. Ali wisely observed that the highly anticipated match is breathing new life into the heavyweight division in men’s boxing while also sharing her insights on the women’s side of the sport.

Stephen A. Smith didn’t let Ali leave the segment without mentioning the possibility of her returning to the ring, and she understood where the host was going with the prodding. Essentially, Ali has heard the challenges from the 10-0 Shields, who is 24 while Ali is 42, and much bigger and taller than the young but talented upstart and Olympic gold medalist.

Ali said that if the purse is hefty enough that she’ll consider the fight plus she wants to silence the barking Shields has been doing for months now. Shields, having seen the segment after it started to go viral, took to Twitter and said that the money is there so now it’s time to put up or shut up. If it does come to fruition, this could have all the makings of a super fight for the ages.

Check out Ali considering the Shields challenge below. Hop to the 6:00-minute mark to hear that portion of the chat.

Laila Ali said she hasn’t fought in 13 years, but she’ll knock a bitch out for the right price! And she was not playin!!!! 24-0 and 21 knockouts! Shiiiitttttt…..

Laila Ali out here talkin shit like her daddy. pic.twitter.com/0kgGAYjR2m

Do I like boxing? No. Would I watch Clarissa Shields v Laila Ali? Hell yeah… pic.twitter.com/CqXJtCoNFG

Laila Ali said lets cut the small talk show me the bag and I'll come out of retirement…..fight party at my spot when it go down! pic.twitter.com/AhFtk3XNek

Bruh if Laila Ali comes outta retirement, I’m buying that fight. She on First Take and she CLEARLY wants ALL the smoke with Clarissa Shields. Got me at the office hyped for a hypothetical fight bro

Laila Ali basically said: Since homegirl keeps calling me out & no female boxer has ever made a million. I'll come out of retirement if the bag is right, just to knock a bitch head off.

Laila Ali is saying she'll come out of retirement to face @Claressashields and it only comes down to the money. Oh boy…

Sexism is claiming that Laila Ali has no chance because she’s 42 but gladly hyped up Floyd (and will again) who is the exact same age. pic.twitter.com/GsVSogZ80b

laila ali said if that bag is securable then lets TALK. pic.twitter.com/hIjJZFVzWO

All I'm saying is Laila Ali stayed retired as hell when Ann Wolfe was in the ring making opponents question their life choices pic.twitter.com/C0vGQ1Btci

Somebody get that bag ready for my girlfriend Laila Ali @TheRealLailaAli !🥊💰🍿
I’m in your corner sis!! pic.twitter.com/VeXzTV7Gyu