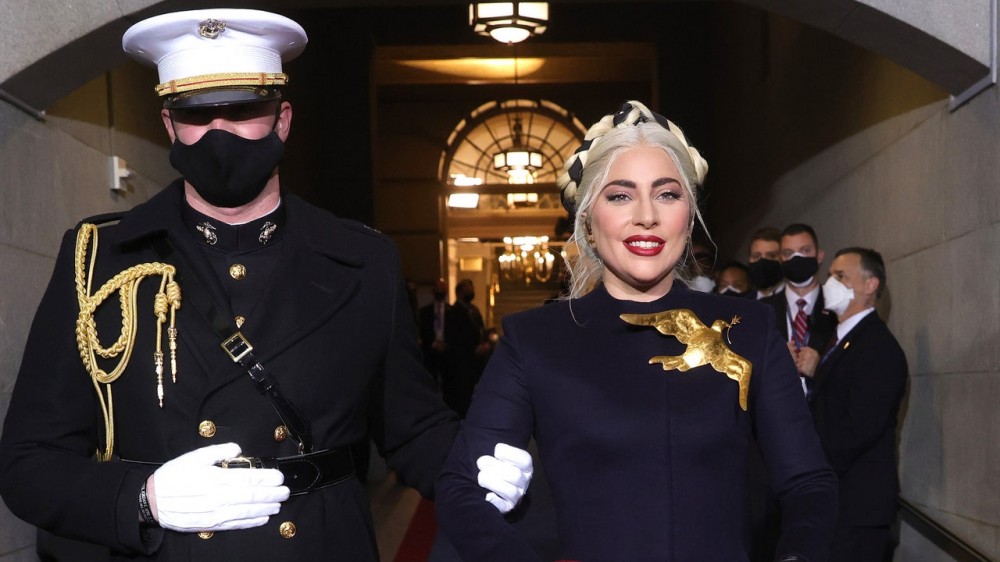 The moment news broke that Lady Gaga would be singing the national anthem at today’s inauguration celebrations, speculation began about what she might wear. Though the star stumped for President-Elect Joe Biden in a simple embroidered sweatshirt when she hit the campaign trail back in November , fans expected that she’d go all out for the big day. Never one to disappoint, Gaga, enlisted an American couturier to create a one-of-a-kind look especially for the occasion. Texas-born Daniel Roseberry, who serves as the artistic director of iconic French house, Schiaparelli, dreamed up a stunning gown that put an avant-garde twist polished style favored at high profile political events. Though the lengthy ruffled crimson silk faille skirt and suiting inspired bodice were worthy of attention, it was the golden dove brooch complete with olive branch pinned to Gaga's lapel that truly captured the spirit of the moment.

While there was no doubt that Gaga would delight vocally as well as sartorially, the choice of Schiaparelli was unexpected. In the past, the attire she’s chosen for political and politically adjacent events has skewed conservative. Case in point: the suffragette white Givenchy cape and turtleneck combo she chose for her arrival in D.C. yesterday. The minimalist outfit emphasized the star’s message rather than her clothes, especially when she shared her hopes for the inauguration on Instagram alongside an image of herself in the Capitol.

Compared to some of the headline-making outfits Gaga has worn in the past Roseberry’s creation was understated. Still, its grandeur added a welcome flourish to the proceedings. According to Gaga’s stylist, Sandra Amador, they wanted to create a vibe that was “strong, romantic, and timeless.” That goal was achieved via the use of dove imagery—a symbol of harmony. “Daniel Roseberry designed the perfect look for this occasion,” shared Amador via email. “The dove, which represents love and peace, was our biggest inspiration. We paired the look with matching Schiaparelli Couture olive branch gold earrings and a pair of Cornelia James black gloves.”

For Roseberry, the look was a tribute to his roots as an artist who consistently pushes the boundaries. “As an American living in Paris, this ensemble is a love letter to the country I miss so dearly and to a performer whose artistry I have so long admired,” he shared via a statement. “Maison Schiaparelli is honored to have this chance to dress the iconic Lady Gaga on this historic Inauguration Day.” On a day centered on new beginnings and the promise of a united future, his optimistic and slightly fantastical design managed to capture the prevailing sense of hope. Elegant, arresting, and distinctly Gaga, the look helped make a historical moment all the more exciting.