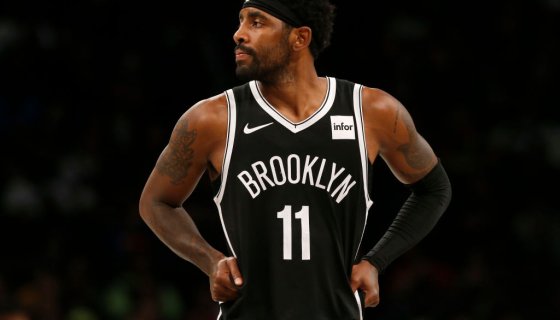 The NBA has that July 30 basketball will resume play, but some of the league’s superstars are calling foul.

Not everyone is excited to pack up and head to Disney’s Wide World of Sports in Orlando next month. Yahoo Sports Chris Haynes is reporting that Brooklyn Nets all-star, , is leading a group of players not happy the league is restarting right now. According to Haynes, “he’s of the mindset that during racial tension, not returning to play should be considered.”

Bleacher Reports‘ Taylor Rooks and Howard Beck report that Irving organizing a phone call that will take place tonight (June.12) with other players to “discuss what position they should take,” and that he’s is a “driving force.”

Even though the NBA board of governors approved the 22-team restart plan by a 29-1 margin and the NBPA board of player representatives supporting the following day, Haynes reports “a significant number” were not happy how the union conducted the vote last Friday.

As @TaylorRooks, @HowardBeck reports, Brooklyn Nets star Kyrie Irving has organized a call tonight for players to discuss what position they should take. He’s of mindset that during racial tension, not returning to play should be considered, sources say. https://t.co/8W8VaZMxQh

Haynes also reports some players are “reluctant to express their views in fear of opposing the superstars who are adamant about playing if proper safety measures are in place.” ESPN’s Adrian Wojnarowski reported that “40 to 50 players” expressed numerous concerns for restarting the season and had a variety of reasons with civil unrest being one of them.

Taylor Rooks reports that 150 players are expected to take part in a zoom call “to solidify” what action they will take and what kind of message they want to unify under. Beck followed that up stating approximately 200 players could participate on the call.

There's growing concern re NBA's bubble plan. Players want more freedom of movement while in Orlando. One agent estimates that 2/3 of the top 40 would refuse to play under the proposed restrictions. https://t.co/IrM5MHPu5e

Yahoo Sports‘ Vincent Goodwill reports that “several high-profile players” have been in communication with other players explaining the potential negative financial impact not playing could have on them.

Yahoo Sources: Several high profile players are communicating with their counterparts and educating them on potential negative financial impact not playing would have on the players, not just for this season but moving forward. (Cont’d)

Yahoo sources cont’d: The high profile players are also relaying that the NBPA won’t have any leverage negotiating a new CBA with owners in the middle of a pandemic

Yahoo Sources: Several high profile players are communicating with their counterparts and educating them on potential negative financial impact not playing would have on the players, not just for this season but moving forward. (Cont’d)

Other concerns players have with the NBA’s plan to restart the season include being unable to leave the Wide World of Sports resort for as long as three months depending on how far your team gets in the postseason, and, of course, COVID-19.

Beginning on June 23, a head coach can be one of the two coaches working with players in voluntary workouts, per sources. https://t.co/elRmBUra5t

Regardless, the NBA is still planning on tipping off July 30.

#NBATwitter, of course, couldn’t resist making jokes out Kyrie’s hesitation to return to NBA action. Some folks agree with Irving’s stance as well. You can peep the tweets in the gallery below.

Kyrie Irving: let just end the nba season so I can play with k-

Kyrie Irving: Hear me out, maybe we shouldn’t play out this season.

LeBron James to Kyrie Irving after the nba resumes pic.twitter.com/yDxtlBcJ8c

Of course Kyrie Irving is leading the charge to not play basketball.

He’s out for the season, has infinite money, and was fooled into believing the world was flat

Plenty of min contract guys who need the money. Tons of $ could be donated to important causes with the profits pic.twitter.com/Te5kn0GVLM

Kyrie: “Hear me out… we should make the NBA cancel the sea—“

Kyrie Irving: We should take a stand and cancel the NBA season

I understand where Kyrie Irving is coming from. The world has never been this focused on racial injustice. Bringing the season back will dilute that progress. I miss the NBA as much as the next fan, but we have to keep this pressure to continue to enforce change. 🤷🏾‍♂️

In all honesty, Kyrie Irving is doing the right thing here we just don't like it because it goes against our wishes.
There are bigger things than Sports right now.

Everyone: finally the nba is returning let’s gooooo

Kyrie Irving: We should cancel the NBA Season.

Kyrie Irving when he got on Zoom with the "200 NBA players"
pic.twitter.com/7VNPh4gB9z

kyrie irving is right AF, cancel the nba season as to protest police brutality. fuck a basketball game we are trying to usher in a new world. the season will let people settle back into a routine and become distracted again. all nba owners should stand in solidarity.