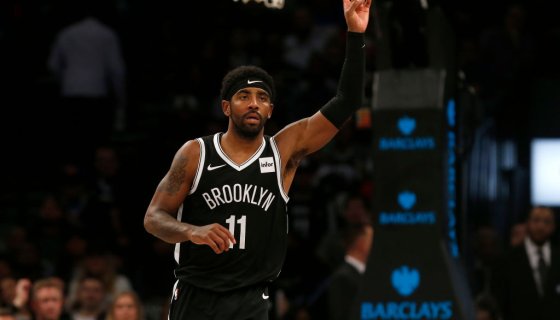 has made no secret that he’s against NBA players returning to the court to finish out the remainder of the season amidst the COVID-19 pandemic that’s claimed the lives of 140,000+ Americans.

So when it got out that many women from the league had decided to continue to shelter in place instead of participating in the season (forfeiting a year’s worth of salary in the process), the Brooklyn Net’s star point guard decided to put his money where his mouth is and is financially helping the women who are sitting out this year’s games.

Blavity is reporting that Irving lunched the KAI Empowerment Initiative this past Monday (July 27) and committed $1.5 million of his own money to help take the financial burden off of players who aren’t risking their health to play ball in front of empty stands.

According to a statement on the KAI Empowerment Initiative website, the program is designed to provide financial support for WNBA players “who are active but will not play in the 2020 WNBA season due to personal, professional, health, and/or safety-related reasons.”

“The KAI Empowerment Initiative is fully funded by Kyrie Irving who has committed $1.5 million to these efforts. In addition, the program will give all WNBA players access to a comprehensive financial literacy program provided by UBS,” the website states.

WNBA players Natasha Cloud and Renee Montgomery are among the athletes who have opted to focus on social justice reform instead of playing this season. According to NBC Sports, some other players who chose to skip the season for health or social justice reasons are Rebecca Allen and Asia Durr of the New York Liberty, Kristi Toliver and Chiney Ogwumike of the Los Angeles Sparks, Jessica Breland of the Phoenix Mercury, Tiffany Hayes of the Atlanta Dream and Liz Cambage of the Las Vegas Aces.

Monster props to Kyrie for helping those who aren’t just protecting their health, but also looking to initiate change at a time when racism, inequality, and right-leaning hatred seem to be reigning supreme.

It’s been a wild start to the season for the WNBA as is what with players calling for Republican Senator and Atlanta Dream co-owner Kelly Loeffler to step down after she criticized the Black Lives Matter movement and suggested it would “destroy” America. Not only has Loeffler refused to leave her post, but she’s also refused to apologize for her statement.

Things really went up a notch on the court this past weekend when players for both the New York Liberty and Seattle Storm not only walked onto the court with Breonna Taylor’s name on their jerseys but also walked off the court during the National Anthem in a show of solidarity for social justice.

Whether or not the Atlanta Dream take similar action to send a message to Loeffler remains to be seen, but if they do best believe we’ll be riding right alongside with them.