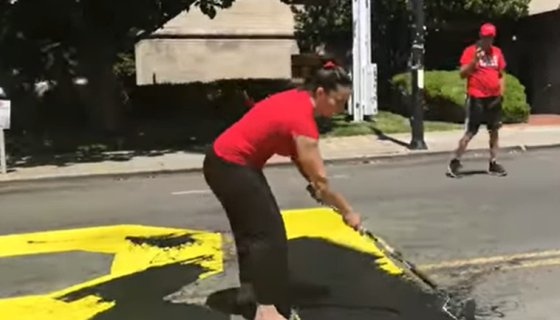 America probably isn’t feeling so great again for a white couple in California that couldn’t mind their business and leave a street sign alone. After painting over the sign in the town of Martinez over the holiday weekend, Nichole Anderson and David Nelson have been charged with a hate crime among other charges.

As reported by local outlet the Martinez Tribune, which referred to Anderson and Nelson as “white trash” in the headline, the couple was charged Tuesday (July 7) by the Contra Costa County District Attorney’s Office with three

misdemeanor counts, one of which is listed as a hate crime.

The Black Lives Matter street sign was displayed in front of the Wakefield Taylor Courthouse in Martinez and was only set to remain their temporarily. The sign was painted on July 4, with Anderson and Nelson, who donned a shirt supporting President Donald Trump, arriving at the area and began painting over the sign with Black paint.

“We must address the root and byproduct of systemic racism in our country. The Black Lives Matter movement is an important civil rights cause that deserves all of our attention,” Contra Costa County District Attorney Diana Becton said a statement. “The mural completed last weekend was a peaceful and powerful way to communicate the importance of black lives in Contra Costa County and the country.”

If convicted the pair could face up to one year in jail.