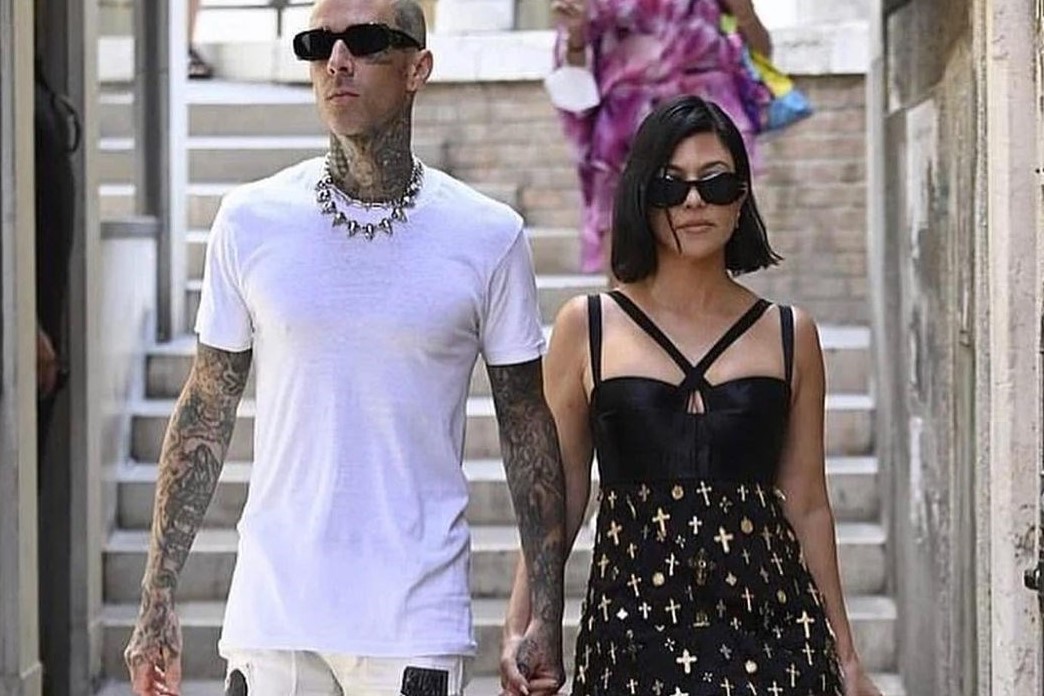 If you see her shoplifting at Hot Topic, no you didn’t

Having taken some well-earned respite from finger-sucking one another on Instagram, Kourtney Kardashian and boyfriend Travis Barker have hauled their heavy petting over to Venice, where they have spent the past weekend sinking Aperol Spritzes and near capsizing the city’s historic gondolas with their increasingly impassioned efforts to straddle each other. And, as has been noted over the past number of months, the Kardashian’s aesthetic overhaul into Blink 182’s very own Dark Lady has seemingly entered a new phase.

Of course, couples have long shed their sense of individuality in an attempt to become one wholly unified behemoth – that’s amore! – but Kourtney’s transition into hot goth girlfriend has seen the Poosh “mogul” quickly abandon her once-beloved Balmain dresses and Jacquemus handbags in favour of Rick Owens leather pants, studded Givenchy mules, grungy Raf Simons knits, and steampunk lace-up skirts. Outfits which look as though they could have been pilfered from any suburban outlet of Hot Topic. Gone, too, is Kourtney’s lush, supplement-fuelled head of hair and glossy French tips in favour of a slashed bob and a pointed black manicure. Mrs Poosh has even dyed her nine-year-old daughter Penelope’s hair blood-red. Bella Goth is shaking.

But Kourtney has not fully committed to the Dark Side just yet – she’s still clinging onto all those vintage Vivienne Westwood bustiers, Tom Ford era Gucci bikini sets, and Skims slips. Together, Kourtney and Travis were invited to Venice – along with a throng of celebrity guests including J Lo, Normani, and Megan Thee Stallion – to sit in the audience at Dolce & Gabbana’s Couture show. It’s not quite evident as to whether Kourtney and her beau summoned the accursed weather themselves, but the runway was ultimately blighted by an unholy downpouring of hail stones.

Though Kourtney and Travis have become flag bearers for a hot goth summer, that winding road has been well-paved by the likes of Pamela Anderson and Tommy Lee, and more recently Megan Fox and Machine Gun Kelly. Check out our deep dive into hot couples and their even hotter wardrobes here.