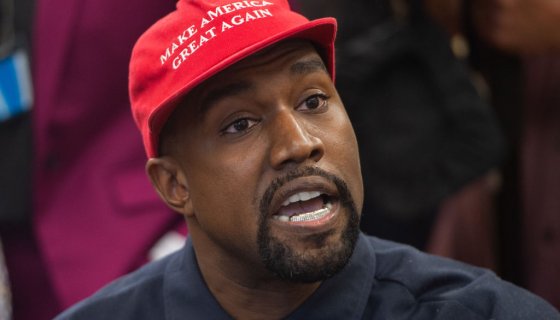 is once more trending and of course, the news isn’t favorable and barely something we wish to cover yet here we are. In his first , the Chicago producer and designer put on his tapdancing shoes and went off on a signature rambling rant that somehow mirrors his terrible take that slavery was a choice.

News of the rally, which was held indoors at the Exquis Event Center in North Charleston in South Carolina. Wearing a bulletproof vest and standing in front of an American Flag, the private, standing-room-only event did not seem COVID-19 compliant, nor did West have a microphone or podium to promote distance between him and the crowd.

Among many head-turning moments during the rally, West got a poor reaction from attendees after saying that Harriet Tubman’s heroic acts as part of the Underground Railroad movement to free captive slaves was actually a ploy to hand the newly freed over to white people.

“Harriet Tubman never actually freed the slave, she just had the slaves go work for other white people,” West is heard saying while the crowd reacted negatively. The attendees did wear masks but social distancing was not observed by those angling for photos and video footage, and all at the event signed a COVID-19 liability waver should it pass any of them contract the virus.

West then went into a mini-rant about the discussion him and his current wife Kim Kardashian West had regarding their eldest child and how they nearly considered an abortion. Becoming emotional, West tearfully exclaimed, “I almost killed my daughter” while also recalling that his mother, the late Dr. Donda West, considered terminating her pregnancy.

From there, West seemed to suggest that divorce was a possibility for him although he praised his wife for carrying their daughter North West to term. With the Birthday Party candidate’s rally in the rearview, fans on Twitter are distancing themselves further from West and his suddenly revived campaign that has the potential to be a non-starter if this rally is any indication.

Kanye West crying on stage at his campaign event in South Carolina pic.twitter.com/GsHAnZQG1c

why is kanye crying in a bullet proof vest screaming i almost killed my daughter pic.twitter.com/bOOCZ3Uj19

😆 what the F**k did he just say. This is all Jay Z fault, Kanye’s first Rally. LOL #bransoncognac #lecheminduroi pic.twitter.com/q2I0dNAzYU

Kanye West brought his black ass to Charleston, South Carolina, home of one of the biggest slave trade ports, home of MULTIPLE slave museums full of history of our ancestors, and fixed his self hating ass mouth to say Harriet Tubman only freed slaves to work for white ppl I- pic.twitter.com/UbtMFx2ElW

Kanye West is not well and going to his rally is as wrong as it would be to get tickets to watch a wounded man bleed on the street.

We hope Kanye West gets the help he needs…. pic.twitter.com/aMLufRhnEG

Kanye West is having some type of …. I don’t even think I’m allowed to say “Breakdown” in 2020. pic.twitter.com/4SMqYQjm98

What the media won't show you: pic.twitter.com/yGXyFugzvV

Harriet Tubman in heaven after Kanye West said she didn’t even free the slaves pic.twitter.com/fsswKd8GsP

Never expect any logical support from celebrities. They're disconnected from the people and history. pic.twitter.com/U2ekZL2LpI

Joe Biden: “We hunger for liberty the way Harriet Tubman and Frederick Douglass did.”

There is only one real choice in November.

#Kanye West: “Harriet Tubman didn’t actually free the slaves, she just had them to go work for other white people”.

I let go of Kanye West years ago. I invite y’all to join me over here. Far less stressful.

Kanye West needs professional help, and the people that are in his life right now clearly don’t care about him at all.

Just watched the videos of Kanye West on the “campaign trail.” This is really scary stuff. I pray he gets the support and help that he needs and deserves.