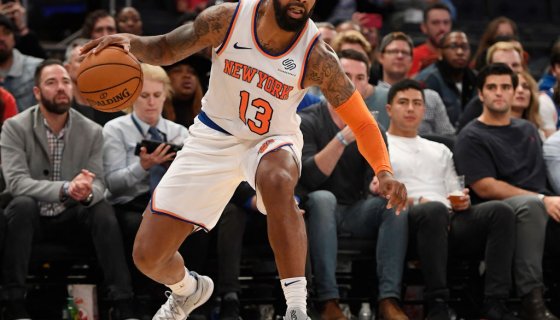 They gotta dog in Hollyhood @LAClippers let’s gets it pic.twitter.com/lQ760kdPxm

Ready for the Moe Harkless era.

Reportedly, the Knicks, Clippers and Wizards agree to a trade that sends Marcus Morris and Isaiah Thomas to the Clippers, while Jerome Robinson will join the Wizards and Harkless and a 2020 first-round draft picks head to the Knicks.

The Clippers, Knicks and Wizards have agreed to a three-team trade that will land Marcus Morris and Isaiah Thomas with the Clippers, league sources tell ESPN. Jerome Robinson will join the Wizards, Moe Harkless and a 2020 first-round pick to the Knicks.

IT won’t be staying, though.

The Clippers will not be keeping Isaiah Thomas, acquired today from Washington in three-team deal with Knicks that brought Marcus Morris to LA and send Moe Harkless/picks to NYC, per league source.

While the Knicks’ move was prudent since Morris was on a 1-year contract, the slander from NBA Twitter is a hilarious requirement. As for the Clippers, they get a rugged, sharp-shooting forward—improving their odds of an NBA Championship.

But we’re here for the jokes and commentary, so let’s peep some of the best.

Source: Knicks’ Marcus Morris has been informed he is a Clipper. Kawhi Leonard, Paul George and L.A. add one of the best players available.

Knicks fans who actually believed they were getting Kyrie, KD, and now D Lo pic.twitter.com/PqFd7MV50f

“Andre Iguodala is going to the Heat”

“Isaiah Thomas and Marcus Morris are going to the Clippers”

The Clippers upgraded Moe Harkless to Marcus Morris and Jerome Robinson to Isaiah Thomas, and did not give up any rotation pieces or young players.

Jerry West is different in that office.

Lakers fans watching the Clippers being active at the trade deadline pic.twitter.com/LBOgpW5jf5

Knicks really demanded the Lakers give up Kuzma, Green, and another piece in return for Marcus Morris…

Pretty epic showdown between the Clippers and Lakers for Marcus Morris. For the Knicks, “there’s no deal without Kuzma” and the Lakers —at this late hour— remain reluctant to part with him.

Lakers fans finding out Marcus Morris was trades to the Clippers pic.twitter.com/6fvlsNk4qq

Lakers: “Kuzma is off the table”