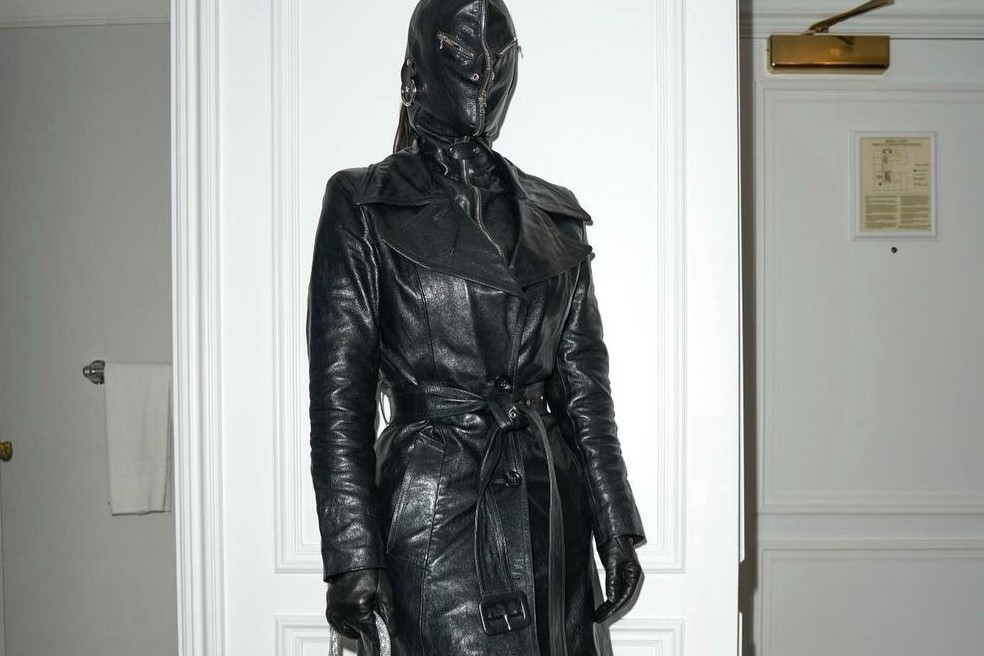 With Kanye West showing up to countless events with a scarf obscuring his face in recent months, seems like soon-to-be ex-wife Kim Kardashian is feeling inspired.

The Keeping Up With the Kardashians star, business mogul, and wannabe lawyer just arrived in New York ahead of the Met Ball’s big 2021 comeback in a full leather look complete with zip-up gimp mask.

The look bears a striking resemblance to one from Demna Gvasalia’s last ever Vetements collections, for SS19, and comprises a severe, cinched in trench, knife-point boots, and mask with attached earrings.

Don’t think KKW was trying to disguise herself to avoid being papped, though – on the contrary, as she entered her hotel suite she posed for photographers and later posted a series of shots on her own IG. Gvasalia is tagged.

This isn’t the first time in recent months that Kardashian has stepped into a full-on fetishy look. At Kanye West’s second Donda listening party last month, she also zipped up into a skintight Balenciaga morphsuit complete with a whip-like plait protruding from the crown.

In fact, Demna Gvasalia has been creative directing the whole Donda rollout, dressing Ye in the Camden Market-esque spiked rubber jacket he wore circa his first Chicago show, and Kim in the closing bridal look from his first ever Balenciaga couture collection, which got its debut back in July.

With the Met Ball taking place for the first time since 2019 tomorrow night, if the theme weren’t great American designers, we’d be pretty convinced Gvasalia might be behind her lewk. But then, it still very well could be, given celebs who stick to the theme are few and far between on any average year – and anyway, the designer is well known for his subversion of the American Dream. Keep your eyes on the red carpet, we guess.

In the meantime, revisit our gallery of the red carpet rebels who ripped up the rulebook below.