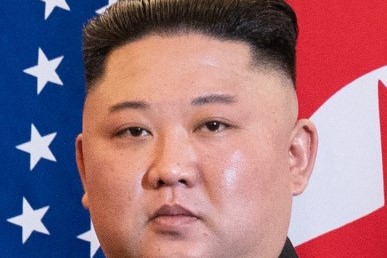 The mullet was, arguably, the breakout hair trend of 2020, making a resurgence thanks to a motley crew of mullet advocates: from Joe Exotic, to Miley Cyrus and Troye Sivan (with Rihanna officially confirming the comeback on the Savage x Fenty runway, before making the cut herself). Unfortunately, if you jumped on the mullet bandwagon, it looks like you’re going to have to call off that trip to North Korea.

Mullets are just one of the looks that North Korean leader Kim Jong-un has reportedly outlawed as of this week. Piercings are also a no-go, as are skinny jeans (which isn’t such a great loss in the year of our lord 2021 — as TikTok will readily point out, that’s one style crackdown that Gen Z can get behind).

The new rules come amid a broader pushback against the “exotic and decadent” influence of capitalism. According to South Korea’s Yonhap News Agency, North Korea’s official newspaper warned of the destructive influence of capitalist culture last week (where’s the lie, tbh?), adding that the country could fall “like a damp wall” if it is allowed to seep in.

“We must be wary of even the slightest sign of the capitalistic lifestyle and fight to get rid of them,” adds Rodong Sinmun, which serves as the official newspaper of the ruling Workers’ Party.

The rules shouldn’t come as too much of a surprise, either, as they follow a long tradition of style restrictions in the country. Kim Jong-un’s autocratic government has previously clamped down on blue denim — as a quintessentially American form of dress — and has made repeated attempts to dictate the hairstyles of its people. Back in 2015, for instance, young male citizens were apparently “ordered” to emulate the leader’s signature, slicked-back hairstyle, amid a crackdown on long hair.

According to Yonhap, North Korea has also recently reenacted a law that strengthens punishment for the possession of videos produced in South Korea, marking further efforts to stem the influence of outside culture that poses a threat to its ideology.