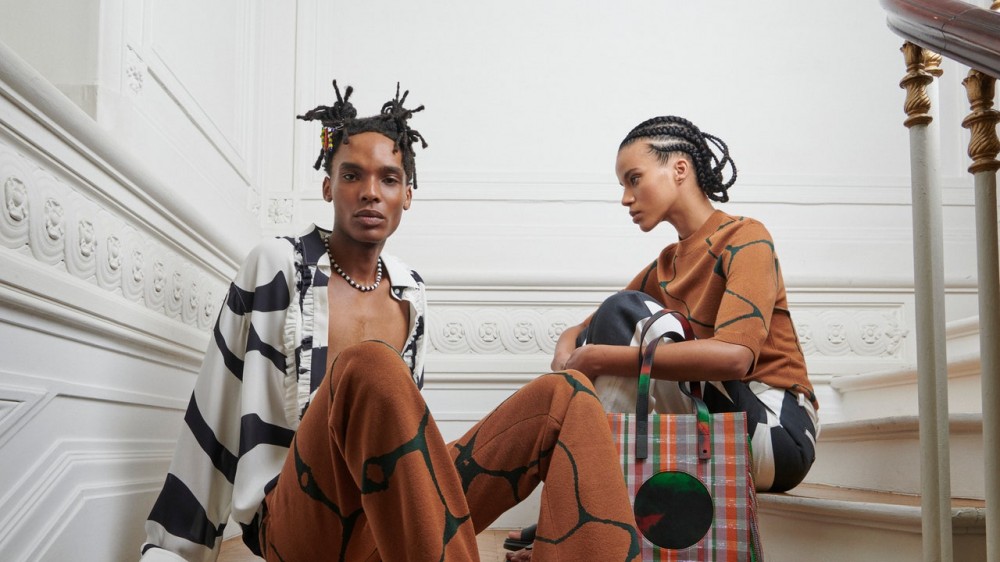 Karl Lagerfeld and Kenneth Ize never met. Lagerfeld died in February of 2019, days before Ize was named a semifinalist for that year’s LVMH Prize, on whose jury Lagerfeld would’ve sat. It’s a missed connection that Ize regrets: He credits Lagerfeld with sparking his teenaged interest in design. But he’s since gotten to know Lagerfeld in another way. Last June, the Maison Karl Lagerfeld announced Ize as its first Black designer collaborator.

After pandemic-related delays, the genderless collection is arriving in stores this week. “It was very important for me to express where I’m from, because it was like introducing myself to [Karl],” says Ize of the lineup. “Every single outfit was based on African imagery.” But it was a growth experience for the 30-year-old Austrian-Nigerian, too. “I’m coming from a space where I’m not as structured because I’m not as big, you know, so learning how to be structured from such a brand was very important.”

Ize worked closely with Carine Roitfeld on the collection’s campaign. The stylist and Lagerfeld went way back—Roitfeld says the first time Lagerfeld shot her was either for Odile Gilbert’s book Her Style in 2003, or for a story about the Marchesa Casati for the New Yorker: the same year—so she has a unique POV on the project: “Kenneth has a new sense of colors, a new sense of seeing things. Karl loved to learn and I think he would be very excited about the origin of these prints… I think he’d have a lot of questions for Kenneth. And I think they would be laughing a lot together. I have this feeling.” Read on for more about how the collection and the images you see here came together.

Carine, what was your first encounter with Kenneth?

Kenneth, do you remember your first meeting?

Kenneth Ize: Yes, it was at LVMH. I actually watched a YouTube video before meeting Carine, because I was so nervous.

I saw some behind the scenes photos from the shoot and it looks like you were both having fun. But let’s start by talking a little bit about what Karl Lagerfeld means to you, Kenneth.

KI: The first time I actually stumbled upon the name Karl Lagerfeld was when I was maybe 17, and working in a retail store. My boss at that time happened to be a huge fan of Karl’s and he would always talk about how he was such a genius and how he does so many things. I started paying attention to his work and watching Chanel shows, and I thought there wasn’t any other show that could ever top them: the energy on those shows was just, like, beyond, and I got the feeling that I would like to do something like that one day. He was such a hard-working person, and he took his job really seriously, and that’s what I’ve taken from him. You could tell that he was someone who really just loved his job.

Carine, what do you think Karl would have made of Kenneth, and the collection that he’s done?

CR: I think he would be surprised, and Karl loved to be surprised. I think he’d say it’s something quite new to have this sort of collaboration and he would’ve loved it, I’m sure, because Kenneth is far away and not so far away from him. He seems far away because he loves all these prints, all these colors, which is not very Karl, in a way. I would’ve loved to see a portrait of Kenneth taken by Karl. Karl, for me, took the best portraits because he liked people. He made a very quick picture, and always you looked good. I would also love to see him wearing some of your clothes, Kenneth. He could wear them.

There’s still a hole in fashion where Karl was. Kenneth, can you talk about how you approached making this collection?

KI: When I was designing the collection I was definitely thinking about the man himself, because he’s the one in the picture. But I knew that it was very important for me to express where I’m from, because it was like introducing myself to him. And that was really what I tried to do: How can I incorporate my own background and my own story into this collection? Every single outfit was based on African imagery, Malick Sidibé imagery for example.

It’s a different kind of collaboration than you might have with a designer who’s still living. It feels like it has a bit more import or meaning.

KI: Exactly. And that was why it was quite challenging for me at first. I was thinking: This has been great, this has to be pure. I need to also respect this person, this person just passed away. For me, the collection has so much emotions. Sometimes it really feels like he’s beside me and I’m telling him a story. I feel really honored to be able to do this.

Carine, can you talk about the images that you made together?

CR: We didn’t know, but the models are lovers in real life. I think you can feel it in the pictures because they’re natural together. We had very good luck, but with Karl we always had some good luck. We were shooting in his office and it was like he was participating. I think he was with us in the room. You know, it’s a no-gender collection, so we put the guy in the skirt… We felt a lot of freedom. I think Karl Lagerfeld gave you, Kenneth, a lot of freedom, but you were also able to learn a lot about working in such a big brand, too.

Kenneth, what would you say you learned from this process?

KI: I’m coming from a space where I’m not as structured because I’m not as big, you know, so learning how to be structured from such a brand was very important. And I really love Hun [Kim, the design director of the Maison Karl Lagerfeld] so, so much. For another designer, it could feel like I was coming into his space. For him to give me his space and to teach me something in his space—this is why I love him so much. For me, I was just learning. And with Carine? You know, having a stylist that can just decide something in 15 seconds. She goes in and she comes out, and I’m like, are you magic?

CR: Of course, they’re not the same generation, so there’s a lot of difference coming from that. But they did go to the same school in Vienna—this is unbelievable. [Lagerfeld taught at Vienna’s University of Applied Arts, where Ize studied.] I think Karl was very open minded. He would be excited to have someone like Kenneth around him, because maybe didn’t know a lot of Kenneths. He has a new sense of colors, a new sense of seeing things. Karl loved to learn and I think he would be very excited about the origin of these prints. He was a very curious person, so I think he’d have a lot of questions for Kenneth. And I think they would be laughing a lot together. I have this feeling.

Did anything happen on set? Or is there a particular image that stands out for you?

CR: There’s one image where the couple is almost kissing. I learned this from Karl. We did a story with Kim and Kanye and they were trying to kiss each other on the mouth. And Karl told me, no, no, not on the mouth, just half a millimeter before touching lips. I remember very well Karl told me: It’s more exciting not really touching the lips, just a little before. It's what we did. I learned this from Karl and the result was great. I learned, keep learning. It was fun. Kenneth told me, let’s play with the clothes, do what you want. When you have the designer next to you it can be a bit difficult. But Karl was the same, he said, do what you like, surprise me. Mix the clothes. Kenneth is the same way. He wants to be surprised at what someone else is doing with his collection. They have the same attitude. They’re very open.

Carine, what you said about Karl and Kenneth being from different generations—I think that’s something that’s really missing in fashion. We’re so focused on the new, these sorts of cross generational opportunities are lost. Hopefully there will be more of them in the future.

CR: It’s good to work with someone like Kenneth because he has a lot of energy, and we need energy now.

Do the two of you anticipate working together again?

The Karl Lagerfeld x Kenneth Ize collection will be available from July 7 on Karl.com, Farfetch.com, Brownsfashion.com, and in the Paris Saint Germain and London Regent Street Karl Lagerfeld flagship stores.