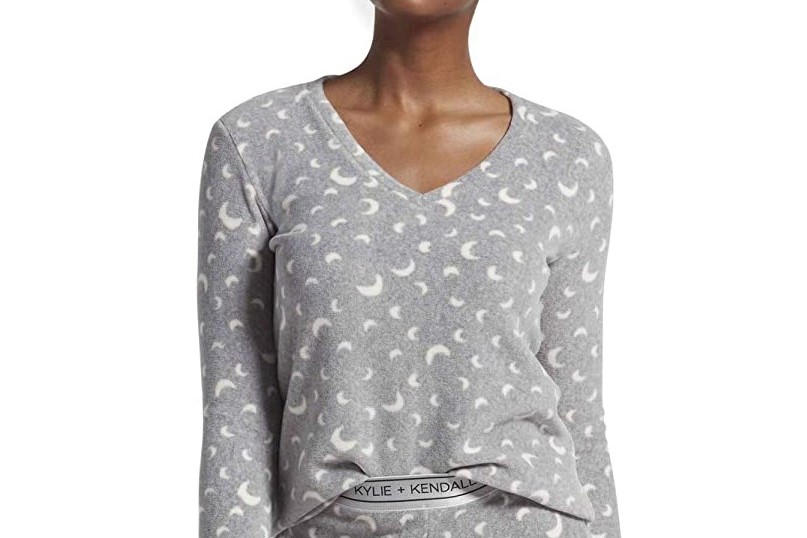 Unless you’ve been living under a rock for the last few years, you’ll be fully aware that Marine Serre’s crescent moon has taken over the world. Seen throughout each and every biannual collection the designer turns out, the motif emblazons countless pieces of her post-apocalyptic futurewear – splattered across second-skin bodysuits, utilitarian parkas, and signature heavy-duty face masks.

In the time since she landed on the fashion landscape, she’s also amassed a pretty solid celebrity following, with the likes of Rosalía, Dua Lipa, Lorde, and Beyoncé all fully signed up members of the Marine Serre fanclub.

Taking their love one step beyond simply throwing on a moon print top or slithering into a skintight bodysuit, however, are Kendall and Kylie Jenner. Seemingly paying homage to Serre via their Amazon clothing line Kendall and Kylie, the sisters dropped a pair of slightly familiar-looking PJs as part of their lounge range.

Crafted from soft grey cotton with a logo-emblazoned elastic waistband, the cosy-looking set is finished with tiny crescent moons, and okay fine, the lunar motif is more irregular than the OG, and the French designer doesn’t own the rights to the emblem… but like squint, and the pyjamas could basically be Serre’s.

Notably, Serre herself came under fire when she first debuted the design back in 2017. Inspired by the 2015 terror attacks which took place in her native Paris, the designer’s Radical Call For Love collection drew criticism from the Muslim community due to its use of the Islamic iconography. Later, Serre explained she had hoped to shift the narrative surrounding the emblem and create positive associations within the media.

Imitation might be the sincerest form of flattery, but, given the Jenners track record when it comes to claims of fashion plagiarism, in this case we reckon Diet Prada might have a few things to say.