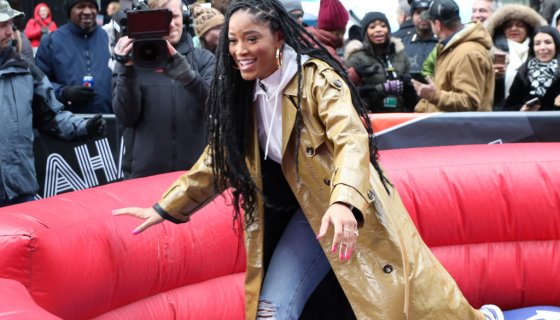 For all the videos and pictures of police officers marching and kneeling with protestors across America, the National Guardsmen seem to have no interest in partaking in such unifying moments. Just ask Keke Palmer.

Joining protestors in Hollywood yesterday (June 2), the actress/singer came face-to-face with deployed National Guardsmen and explained that they were following the orders of a “President who’s trying to incite a race war.” Seemingly unmoved by the jewels she was dropping on them, Palmer went on to remind them that “we need you” and ask them to “March beside us. You get your people. March beside us. March beside us. Let the revolution be televised.”

But even with the crowd cheering and chanting for the soldiers to join the movement, things didn’t turn into a feel-good moment as one of the guardsman listening to her declined the invitation explaining that he “can’t leave this post” as he’s under orders from the White House to protect Bunker B*tch all the way from California. Okay, he didn’t say all that but we all know why the military was called into action.

On the other hand the soldier talking to Keke did offer to march with protestors down the street but couldn’t leave the premises. Palmer then proceeded to request they kneel in solidarity with the cause to which said soldier agreed and though Palmer then replied “that ain’t enough for me,” he did so anyway and was joined one by one by his squad.

Well, something’s better than nothing at this point.

Check out the entire encounter below.

Watch all of this. pic.twitter.com/YHq0QhXrnw