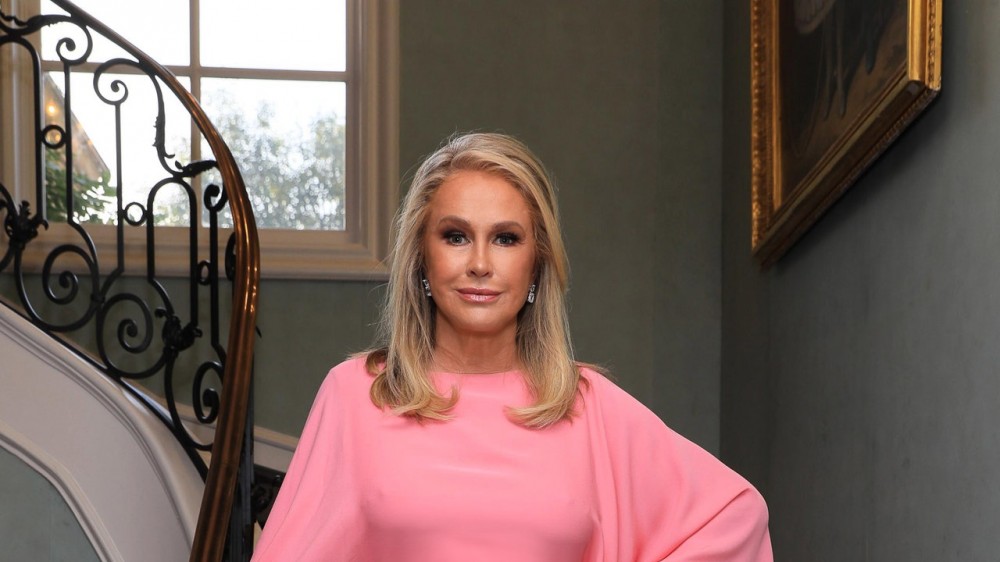 If the latest addition to The Real Housewives of Beverly Hills cast has you thinking that Real Sisters of Beverly Hills could well have been the alternative title for the franchise, you’re not alone. Sisters Kim and Kyle Richards formed the foundation for the show and acted as its guiding stars for a decade. Now Kathy Hilton, the eldest of the three and matriarch of the Hilton dynasty, has joined the cast as a friend.

While the producers had been chasing Kathy to sign on to the show for several years, the timing had never been right for her, until now. “What I’ve learned in life is never say never,” she says, “My sister Kyle and I had gone through some ups and downs in our relationship so when she started calling me, and literally she was not going to take no for an answer, I thought, this is a great opportunity to spend time with her.”

Hilton is certainly no stranger to the screen. As a child actor she appeared in shows including Bewitched, Happy Days and The Rockford Files; more recently she hosted the game show I Want To Be a Hilton and popped up in The World According to Paris, along with a few guest appearances on Real Housewives. No wonder then that she didn’t feel the need to get the green light from her daughters, Paris Hilton and Nicky Hilton Rothschild, when it came to signing on the dotted line. “I didn’t even discuss it with the girls because I knew they wouldn’t like it. Once I really made up my mind, I thought I’m just going to avoid their calls,” she says. “My husband and the boys didn’t have any problem with it. They know that I’m not going to get in there and make a fool of myself and be embarrassing and fight. That’s just not who I am.”

As a friend, rather than a housewife, Hilton could not only deftly sidestep the squabbles the show is known for but was also able to assume the lofty role of den mother, dispensing enigmatic words of wisdom to the other cast members when the mercury started to rise. The trailer provided a teaser with Kathy telling Kyle that “life is a poker game and everybody has to show their cards.” “I would have loved to have been a psychiatrist or therapist. I really do like helping people walk through it,” she says. “When the girls got angry and wanted to get up and leave I would say, ‘Please just sit down, let’s just calm down. Remember, once you ring the bell, you can't unring the bell.’” A self confessed prankster, Hilton says she also felt she could bring some light humor to show with her signature practical jokes “I’m not about drama,” she says. “I just want to have fun.”

All in all, Hilton says she survived the experience pretty much unscathed, aside from a rude style awakening. “I have to be honest, I don’t really watch the show and I did not realize how glamorous they all were,” she says. “For that first episode at the barbecue I wore a very simple dress and some espadrilles—that was the dressiest I had been in eight months. Then I walked in and it was like a Vogue magazine spread meets the Oscar red carpet meets the couture shows in Paris. I had my hair done and makeup done, of course, but I just didn’t think that we would be getting that dressed up. The whole thing encouraged me to make a little more effort. I was like, wow, I better step up my game.”

Hilton is being modest here. As a red carpet and fashion week regular and designer of her own line, the Kathy Hilton Collection which sold at Neiman Marcus and Saks Fifth Avenue, she has a wardrobe brimming with Oscar de la Renta, Chanel, Valentino, and YSL that she has collected over the years. “I mix it up with other things too,” she says. “You know I'm not one of these head to toe people. I always say, you don’t have to put on the whole closet.” Like many of us over the past year, Hilton also did a top-to-bottom closet clean out recently. “My husband always makes me go through what I’m not wearing and donate it, so the driveway is full of boxes,” she says. “Some things the girls are taking, which is funny as I could not get Paris and Nicky to look at them ten years ago. Now all the sudden, they’re like, ‘Give me that’. They both have bigger feet than me but they can fit into my jackets, some very beautiful little Chanel suits and, of course, my handbags.” Other pieces will go to The Colleagues resale in L.A. which benefits the Children’s Institute and the Los Angeles Mission, which helps people experiencing homelessness.

Now that the filming has wrapped, Hilton will be turning her attention to her daughter Paris’s upcoming wedding to venture capitalist Carter Reum. So does she have an outfit planned? “You know, I have absolutely no idea,” she says. “Somebody asked me that two days ago and I’m like, I think we need to get the date down first.”

Hilton (who also helped plan her son Barron’s nuptials on the beach in St Barth’s and daughter Nicky’s wedding at Kensington Palace) will be heavily involved with organizing the event, working alongside Hollywood’s go-to party consultant Mindy Weiss. “It’s going to be what I want and what Paris wants,” she says, although what Paris wants is still up in the air. “First she said Napa in October. I said, ‘Where did you get this idea of Napa? Have you ever been to Napa? You don’t even like wine?’” Other venues being tossed around include Hilton’s father-in-law’s former home, the historic Jay Paley Residence in Bel Air, and New York City. Meanwhile a new reality show has just been announced —tentatively titled Paris in Love—which will follow Paris as she plans and prepares for the big day. Expect to see plenty more of the Richards/Hilton sisters on your screens this year.