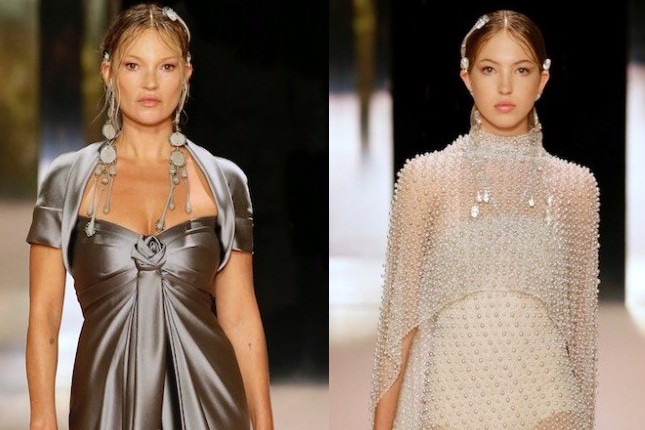 Inspired by the Bloomsbury set and celebrating family ties, Kim Jones made his Haute Couture debut at the historic Italian house

After presenting his latest collection for Dior late last week, yesterday, Kim Jones made his long-awaited Fendi debut. Invited by Silvia Venturini Fendi to take the reins at the historic Italian house, his appointment marks the first time the designer has (officially) dipped his toe into womenswear – and what an impression he made.

With worldwide lockdown restrictions still rendering the idea of a fashion show null and void (truly, when will it end?) like many others, Jones opted to deliver his debut couture collection through a live broadcasted runway show. With Demi Moore opening proceedings in an all-black look, models made their way through a labyrinthine Fendi maze of glass panels, and assembled themselves inside neat cubicles full of Jones’ own antiques.

While Moore’s appearance came as a bit of a surprise, naturally, everyone you’d expect the designer send out onto the catwalk was there – with the all-star casting revealing the show as something of a family affair. OG supers Kate Moss, Naomi Campbell, and Christy Turlington were reunited on the runway, with Moss and Turlington joined by daughter Lila and son James respectively. Bella Hadid, Cara Delevingne, and sisters Adwoa and Kesewa Aboah also repped the new gen, as Silvia’s daughters Leonetta Luciano and Delfina Delettrez Fendi rounded things off.

It makes sense, then, that Jones had pioneering women and familial bonds in mind when putting together the collection. Having been friends with Moss since he was introduced to her by Lee McQueen back in the 90s, and forging strong bonds with Campbell across the course of his career, he also honoured Fendi’s lineage of largely female creators, paying homage to those that came before him, and continue to work alongside him.

More inspiration came via the Bloomsbury Set, who, in case you’re not familiar, were a progressive, boundary-pushing group of English writers, artists, and philosophers who rose to prominence in the early 20th century – with Virginia Woolf, Vanessa Bell, and Roger Fry among them. Growing up close to their Charleston Farm bolthole, and with an interest in the group that extends back to childhood, Jones recently revealed to Vogue much of his youth was spent hanging out and sketching in the grounds of their Sussex property, trawling secondhand bookshops for their literary works, and even writing school essays on their famously tangled lives.

With Woolf’s great gender-defying queer novel Orlando the most tangible starting point for the collection, Jones looked to the the book’s themes and the era it was released when it came to the clothes. This meant slinky, diaphanous gowns crafted from mesh, dotted throughout with pearls, delicate glass beads, and crystals, shimmering silk brocade capes and cap-sleeved, empire line dresses (as worn by Moss), and binary-blurring tailored looks that incorporated slim tuxedos and trousers, with some looks clashing masculine and feminine elements in much the same way as the Orlando’s shapeshifting protagonist does.

Rich marbled and floral jacquards seen across a number of pieces took their motifs from the lining pages of Bloomsbury books, while passages of text from letters sent between Woolf and lover Vita Sackville-West were embossed on leather boots. Rounding things off was statement-making jewellery in the form of encrusted crystal ear cuffs and dramatic chandelier earrings crafted from blown Murano glass that brushed models’ chests as they walked. We might have entered the roaring 2020s in dismal fashion, but if Jones has anything to do with it, the future’s looking altogether more glamorous.

Watch the show below.