“I felt very Beyoncé just now,” Karol G says from inside her car, during a surprise paparazzi ambush in downtown New York City. “I felt very Karol G,” she adds. It was the first of many times she’d refer to herself in third person that day: she, Carolina Giraldo Navarro, marveling over Karol G’s newfound stardom.

The 28-year-old Colombian star carries the sort of glow that comes when you finally reap the rewards of over a decade’s work; but it’s only within the last three that she’s birthed her most recognizable songs. In her 2017 debut, Unstoppable, Giraldo mastered pop reggaeton hits from a place of a woman scorned: post-breakup songs like “A Ella,” and “Casi Nada” unleashed a proverbial phoenix, arisen from the ashes. But it was her belt-worthy lines in the Bad Bunny-assisted “Ahora Me Llama” that truly attested the singer-songwriter’s longevity; it was then that Giraldo joined the increasingly-global pop urbano wave and established herself as one of its most standout acts. Yet with her newly-released sophomore album, Ocean, she’s looking to ride her own current.

“Sometimes people ask me,” says Giraldo in Spanish, “’If the Carolina today could say something to the one in the past, what would it be?’ And I say, ‘I think she did speak to her. She never let her give up.’”

Giraldo paces back and forth inside the Build Series studio in Manhattan, where she will soon face a live audience; her eyes narrowly avert the array of screens playing her videos and songs. Sporting platform Timberland boots, bedazzled Gucci glasses and long pearl white acrylics, Karol’s style is feminine and sexy, yet sporty and tomboyish — but never cute. “It’s too cute-sy,” she says with a smirk, surveying a new chain she had custom-made for herself. “I’m not cute.”

To Giraldo, every day is a Monday; her competitive nature and fixation on global domination has made her a bit of a workaholic. “The difference between extraordinary and ordinary is the extra,” she says. Released during a pivotal moment in her career, Ocean is the product of an acute awareness of where she stands in the Latin pop ecosystem right now; as well as an effort to shift the conversation surrounding her persona, which has taken on a life of its own this year. Since releasing “Secreto” with her fiancée, Latin trapero Anuel AA — arguably her most successful song yet, with over 250 million streams and a steady place in the Latin charts — very little in her life is secret.

A unified vision and On The Run-style tour with her fiancée has meant selling out stadiums all over Latin America. And yet tabloids paint a picture of Giraldo in her partner’s shadow, and sometimes deem her responsible for his ill-conceived social media posts and actions. In the days following her interview with Rolling Stone, Giraldo opted to perform solo at the star-studded Mega Mezcla concert in New Jersey — where Anuel was also on the lineup — for reasons more professional than personal. “I want to demonstrate that Karol G is successful, [with just] Karol G,” she says.

After the success of their two singles together, she’s ready, if not desperate to shine solo again; although Ocean sees the couple share space in “Culpables,” as well as a new ballad titled “Dices Que Te Vas” — which she felt was a necessary exception, in that it portrayed a realistic back-and-forth between disharmonious lovers.

In contrast to her 2017 debut, the new songs in particular show a songwriter who’s incandescently in love — namely with her work. Mentally, she admits she went into this project hating fame a bit, but loving her art more than ever. “I made this album wanting — no — needing to fall in love with all this again,” she professes.

Even though most people know Karol G for her more sexually-charged hits — including her 2019 ode to the G-spot, “Punto G” — the inclusion of piano and guitar-based instrumentals give her room to build on the foundation she’s already set, while tapping into uncharted territory and leaning into her softer, more romantic side. “It’s fun, and it’s sexy,” she says of Ocean. “But I also want to show people that there’s more to me.”

As a female artist, being sexually expressive isn’t so much a political act for her as it is a natural inclination — a mere blip in the varied spectrum of emotions she hopes to convey through her work. “My challenge with this album was to show people that I’m not just [being sexual] to succeed,” she continues. “This is me saying, ‘Miren pa’ que hablen.’ (Look, here’s something to talk about.) And if they keep talking, there’s not much more I can do.”

When defining what “making it big” would mean to her, she cites Shakira’s international crossover, Selena Quintanilla’s enduring cultural significance, and Beyoncé’s perfectionism — referring to them all with admiration and firm confidence that those are tenable goals for herself. “Have you seen [Beyoncé’s Homecoming]?!” she asks her manager Javier Huerres, expressing awe over Bey’s eight painstaking months of practice for Coachella.

In Giraldo’s own documentary, La Guerrera del Género — which translates to “The Warrior of the Genre,” but is a word play on “gender” — Karol G’s rise was similarly cemented in an unwavering dedication to her craft. For years, the aspiring artist kicked off her days with three-hour voice lessons, that typically started no later than 5 a.m. Looking back on those early days, her coach at the time, Mirabay Montoya, told Univision: “Every building has to have a profoundly strong foundation; if not, it falls.”

“I have a personal dream,” Giraldo tells Rolling Stone in a slurring, Red-Bull-sustained burst of excitement. “To be a mom, to have a family and all that but — when I do take that break to fulfill it — I want everything else to be so strong and set that people don’t forget me.” 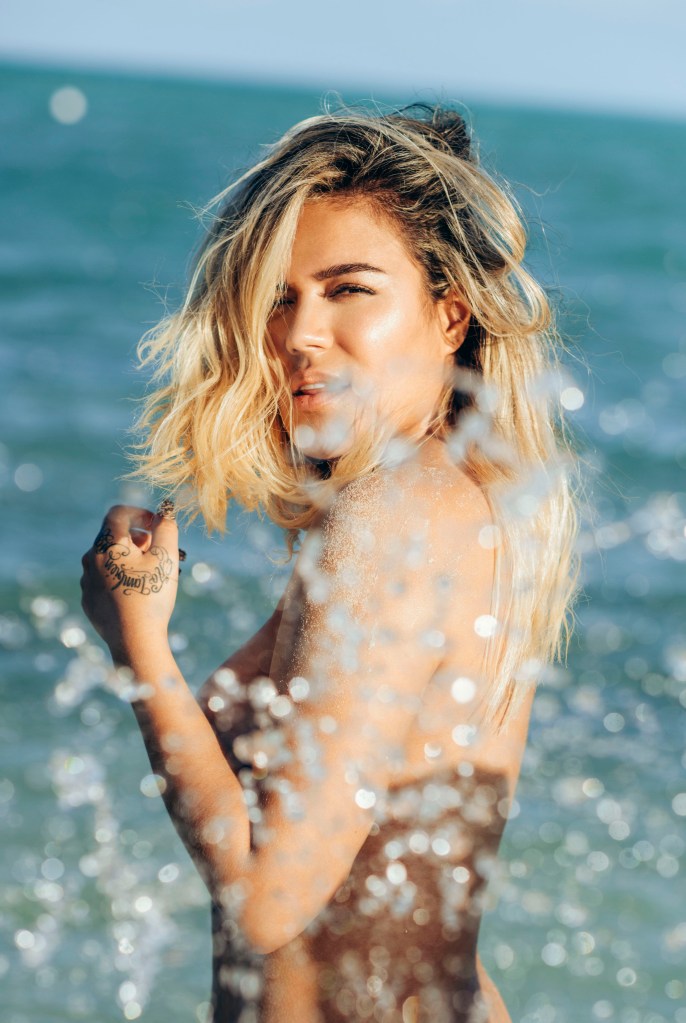 “I wanna be remembered as someone who broke all the norms,” says Karol G, born Carolina Giraldo Navarro.

Carolina Giraldo Navarro was born in Medellín, Colombia on February 14th, 1991 — destined to be a romantic. The youngest of three, she was the main recipient of the music gene by way of her father, Juan Guillermo Giraldo, who would become her mentor and manager in the onset of her career. She laughs as she remembers the days when she pretended to be her own personal assistant on business calls; since then she’s grown a team of near-twenty, with her father and sister among them.

Giraldo studied music at the University of Antioquia and sang backup for a few local artists — including reggaetonero Reykon, with whom she recorded “301” in 2012. But lacking momentum as a solo artist, Giraldo soon threw in the towel and moved to New York on her own, where she could survey the music business from behind the scenes. She returned home to Colombia a couple years later — to her father’s great satisfaction — and gave it another go as an independent artist. It worked: in 2016, she would sign with Universal Music Latino and re-introduce the world to Karol G.

“I can sit with you in two, three years and know [that] things are going to be super different,” she says. “I’ve proven it to myself, so I’d rather not stop and just keep evolving. Let’s keep evolving.”

Long before she was awarded Best New Artist at the 2018 Latin Grammys, Giraldo began working her way up to acclaim with local shows and enviable collaborations. By the age of 14, her appearance on Colombia’s version of The X-Factor seeded her ambitions for pop superstardom; it seemed written in the stars when, a few years later, she found herself on stage with J Balvin at a local quinceaño bash. The two struck an unlikely friendship, that would eventually lead to a remix of her 2018 smash hit, “Mi Cama,” featuring Nicky Jam; remixes and opportune features, in fact, were what pushed her further into the urbano market. But preceding numerous collaborations with the likes of Anuel AA, Ozuna and Luis Fonsi, was her 2014 dancehall song “Ricos Besos” — the single that got her a coveted Number One spot on the Colombian pop charts, with no need for additives.

“¡Puro humo!” says one of her managers when Giraldo mentions a young rising artist she has her eye on — a phrase which translates to “She’s all hype.” Being all hype, is exactly the fate that Karol G — an artist with 16 million Instagram followers and wide-scale name recognition in the Latin market, but little elsewhere — is trying to avoid.

“I wanna be remembered as someone who broke all the norms,” she says. “Who — without forgetting her Latina roots — was known all around the world for what she did.”

Long before Karol G became a fixture in present-day reggaeton, there was the Panamanian legend La Atrevida; then Puerto Rican sex-positive pioneer, Ivy Queen; and Glory, best known for her timeless hook in “Gasolina.” But when recounting the greats who inspired her artistic vision, the only reggaeton artist Giraldo actually mentions is Daddy Yankee. She cites a stylistically diverse range of artists: Thalía, Spice Girls, Jerry Rivera, The Bee Gees, Red Hot Chili Peppers and RBD — the band from the Mexican teen soap opera, Rebelde. She deems the diverse sonic palette that colored her childhood partially responsible for the fact that she now considers herself beyond definition. Flexing between trap, reggae, ballads and more, the widely-labeled urbano artist wants to show the world she’s not just a reggaetonera.

“To be the queen of a single genre…” she says, lifting her arms and pinching the air, “That is this small.”

Now, having garnered a comfortable level of fame that allows for her to be more selective with her collaborations, Giraldo is focused on proving that she has the range. The multilingual and pan-genre tracklist of Ocean is a bet Giraldo took on her future as a crossover artist: she flaunts the span of her ability through her features on Ocean, which includes a bilingual reggae song with Damian Marley; a smooth Portuguese–Spanish fusion with Brazilian sister act Simone & Simaria; and the introspective hip-hop closing track, “Yo Aprendí,” with Cuban wordsmith Danay Suárez. I’m not better than anyone, nobody is better than me, sings Giraldo. I don’t understand why everyone wants to mirror each other. People clone themselves and lose their own voice.

In an industry that often pushes people to become glossy avatars of what they believe sells — often prioritizing streams over substance — Ocean sees Giraldo take more risks as an artist than as a product. “We’re in an industry that has no memory,” she says at dinner. “You make the hit of the moment, [then] someone else comes and does another. Artists come and go, and that’s my fear… that’s what keeps me focused.”

After proving that she’s no one-hit wonder, she’s aware that the work she puts out now will determine whether she’ll be encased in the amber of urbano for the next decade — or whether she’ll break free and soar to new heights, reaching audiences beyond Latin America. The excitement, anxiety, and fear surrounding it all are what keeps her on her toes. “It’s either going to finish me, or take me to the level I want to get to,” she muses.

And though she’s fully aware she can’t pull her name from the tabloids, nor the discourse, she demands a part in controlling her own narrative at large. When asked what’s the one thing she wants people to know about both Carolina the woman, and Karol G the artist, she simply says: Que soy una persona. “That I’m a person.”

“We’re in an industry that has no memory,” says Karol G. “Artists come and go, and that’s my fear… that’s what keeps me focused.”