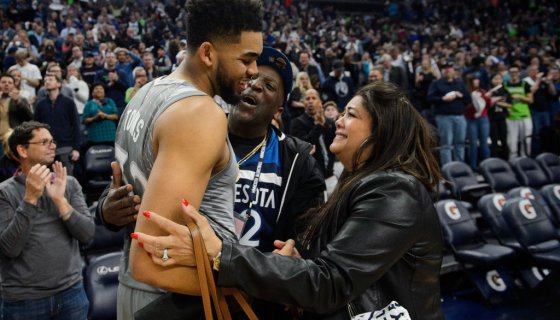 The spread of the and the COVID-19 diagnoses have not just hit the general public, but known figures as well. NBA star is urging the public to take the situation seriously as his mother is currently fighting for her life after being stricken with the virus.

The Minnesota Timberwolves big man shared details of his family’s ordeal Instagram video, this after his parents both began feeling ill. In the clip, it’s obvious that the 24-year-old New Jersey native hasn’t been resting much and that the news has taken quite the emotional toll. However, Towns powered through to deliver his message to his fans, family, and outside observers.

While his father Karl Towns Sr. was sent home to self-quarantine, Towns’ mother Jacqueline Cruz, who hails from the Dominican Republic, began to suffer greater symptoms and was held at the hospital for treatment. Showing incredible resolve and composure despite the heaviness of the news, Towns said that his mother’s currently in a medically-induced coma and has her breathing assisted with a ventilator.

Choking back tears, Towns expressed to 2.8 million followers on Instagram that they need to practice social distancing, take care of their family and loved ones, and also themselves. From our side, watching Towns fight to keep it together and still push for the public to raise their awareness is both admirable and heartbreaking. Our thoughts and prayers are with Karl-Anthony Towns and his family.

Check out the video below and heed the words. COVID-19 is no joke as we’re witnessing in real-time.

Sharing my story in the hopes that everyone stays at home! We need more equipment and we need to help those medical personnel on the front lines. Thank you to the medical staff who are helping my mom. You are all the true heroes! Praying for all of us at this difficult time.