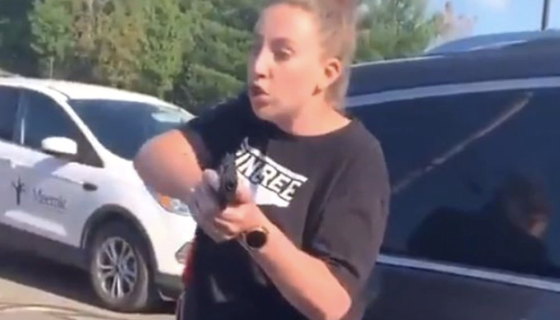 Ever since taking office three and a half years ago, Donald Trump’ has implemented his vision of his “Amerikkka” which has caused our society to devolve into a racial culture war where his when dealing with Black and Brown people in their lives.

The latest incident came yesterday in Detroit Michigan when a Black woman confronted a white woman for bumping her 15-year-old daughter as they entered a Chipotle’s only to have a gun pointed at her and her child. The Detroit News is reporting that on Wednesday (July 1), a shouting match between Takelia Hill and Jillian Wuestenberg ensued after Wuestenberg refused to apologize for the incident and ultimately decided to pull a firearm on the mother and daughter outside of the Orion Township restaurant.

“Before I could walk into Chipotle, this woman was coming out, and I had moved out the way so she can walk out,” Makayla Green said. “She bumped me, and I said, ‘Excuse you.’ And then she started cussing me out and saying things like I was invading her personal space.”

The teen called her mother over because she said she was scared.

“I walked up on the woman yelling at my daughter,” Hill said. “She couldn’t see me because her back was to me, but she was in my daughter’s face.”

Initially it seemed like the couple were going to drive off after the incident as the woman got in her car and said “You cannot just walk around calling white people racist … White people aren’t racist … I care about you and I’m sorry if you had an incident that has made someone make you feel like that. No one is racist.” But after Hill hit the back of the car window fearing it was going to hit her as it backed out of the parking space, Jillian Wuestenberg hopped out brandishing a gun and telling Hill and her daughter to “Get the f*ck back!” and “Back the f*ck up!”

The white Onyx is here! Sorry, couldn’t pass that one up. Older heads get the reference.

Luckily for everyone the incident was caught on camera and after making the rounds online, Oakland County Sheriff Michael Bouchard announced that Jillian Wuestenberg, 32, and Eric Wuestenberg, 42, were arrested and charged with felonious assault and each face up to 4 years in prison for their asinine actions. The gun-totin’ couple were arraigned in 52-3 District Court before Magistrate Marie Soma and hit with a $50,000 personal bond.

Do the crime do the time. While these MAGA supporters might feel like it’s the 1920’s, the law says it’s 2020 and you pulling a gun on someone who isn’t white for no reason will get you locked up.