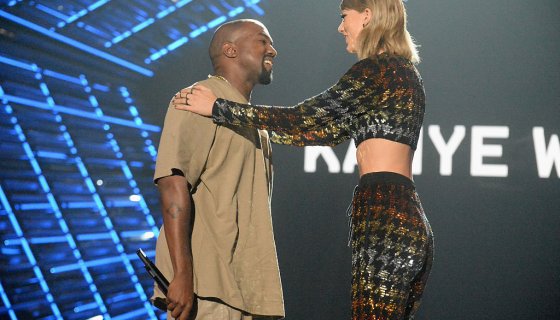 The saga continues. The full conversation between from back in 2016 when the rapper told her about his salacious line from “Famous” has leaked, and it’s a bad look for Yeezy and his wife Kim Kardashian.

First, a quick refresher on the backstory. Back in early 2016, Yeezy dropped “Famous” which featured the lines, “For all my Southside n*ggas that know me best/I feel like me and Taylor might still have /Why? I made that bitch famous.”

The lyric itself referenced back in 2009 when West crashed the stage in dismay during Swift’s acceptance speech for winning Best Female video (“You Belong With Me”) by noting that Beyoncé (“Single Ladies”) still had “one of the best videos of all time.”

Back to 2016, soon after “Famous” dropped, , and her fans start coming for West. That’s when where the former allegedly made the Pop star aware of the line and seemingly got her blessing.

However, the full convo between Swift and Yeezy paints a different story. In the clip, West takes an awkwardly long time to explain his “controversial” line while a wary Swift (she asks if it’s going to be “mean”) asks him to share. But the only lyric he actually relays is, “To all my Southside n*ggas that know me best/I feel like Taylor might owe me .”

Swift has always maintained that Kanye West never made her aware of the “I made that bitch famous” line, and the leaked video of the phone call confirms her side of the story. So now that same army West references in their awkward convo is coming for him, and his ride or die wife. So much so that the #KanyeWestIsOverParty hashtag is trending.

Now, who leaked the video? And if either of these two coincidentally drop music we’ll be pointing at the jig.

Peep some of the potent slander, and Yeezy defenses, below.

So in other news … the entire phone call between Kanye West & Taylor Swift leaked. Turns out she was telling the truth the whole time and he’s the snake instead of her💀💀💀

So y’all bullied Taylor Swift, called her a snake, a liar & tried to end her career which led to her disappearing for a year and her questioning whether she even wanted to continue making music FOR WHAT? FOR TELLING US THE FUCKING TRUTH#KanyeWestIsOverParty #TaylorToldTheTruth pic.twitter.com/1V3OeOlAMv

“If a man talks shit, then I owe him nothing. I don't regret it one bit, 'cause he had it coming” – Taylor Swift#TaylorWasRight #KanyeWestIsOverParty pic.twitter.com/IZbuutS0uT

Kim when she wake up today and read all of her notifications and mentions on social media #TaylorToldTheTruth #KanyeWestIsOverParty pic.twitter.com/NFKekLRi7j

so you’re telling me it took kanye west 8 months to come up with the line “i feel like taylor swift might owe me ” while it took 18 year old taylor swift only 20 minutes to write an iconic song like love story #KanyeWestIsOverParty pic.twitter.com/T0knHGXYka

“Kanye still made her famous”

Kanye West: Takes 8 months to write one of the most stupidest line ever..

twitter swifties spread the video and trended #KanyeWestIsOverParty to #1 worldwide while insta swifties spammed kim kardashian’s comments so what did those useless tumblr swifties do pic.twitter.com/wKUdmQQ33A

tbh it aint possible for anyone to access a confidential video such as the unedited phone conversation of taylor and kanye. if someone leaked it, it would be a member of the kardashian family#TaylorToldTheTruth #KanyeWestisOverPartypic.twitter.com/UdthUeps6T

I don’t want just a notes app apology. I want a video explaining why they manipulated, targeted, bullied and harassed a kind woman into going into a very dark, emotional place to the point she isolated herself, drank a lot and felt like her career was over. #KanyeWestIsOverParty

Remember when Beyonce and Jay-Z went to Taylor's birthday party instead of Kim and Kanye's wedding#KanyeWestIsOverParty pic.twitter.com/6CDZuYjkxp

Taylor Swift waking up today seeing the entire phone call leaked and everyone now knows the truth that she’s not a snake. #KanyeWestIsOverParty #TaylorToldTheTruth pic.twitter.com/WjQjzgvh50

Kanye West did NOT make Taylor Swift famous. She sold 7m+ of her Fearless album before the moment that Kanye, a grown 32 year old man, ran up on stage and stole the mic from a 19 year old Taylor. I’m glad to know she called him on it. #KanyeWestIsOverParty pic.twitter.com/uD2txAYpb5

– NOT mentioning the specific line, ‘I made that b*tch famous' to Taylor Swift
– manipulation
– perjury
– gaslighting
– framing TS#TaylorSwiftWasRightpic.twitter.com/qmA3VTNiHk