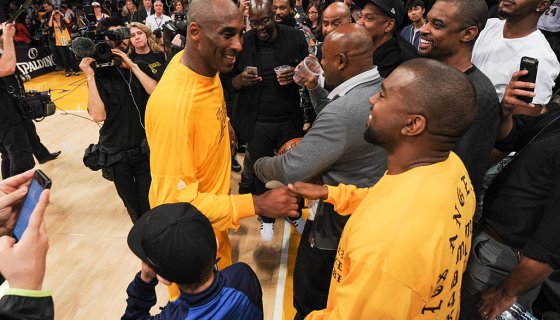 always strived for greatness, so there is no question Kanye West was a fan. During his Sunday Service yeterday (Jan. 26), Yeezy eulogized the NBA legend who died suddenly that same day.

“I was driving home, they was leaving your jersey on the freeway, And I just broke down, broke down, broke down,” West can be heard freestyling in the clip below. Franklin did his thing while Chance through in some verses from “Ultralight Beam” off Yeezy’s The Life of Pablo album.

West also took to social media to speak on Bryant’s passing. “Kobe, We love you brother We’re praying for your family and appreciate the life you’ve lived and all the inspiration you gave,” he tweeted just before his weekly Sunday Service. The tweet was the caption for a photo of himself, Kobe, Swizz Beatz and Yasiin Bey in a studio.

You may recall that back in 2012 for the Kobe System campaign.