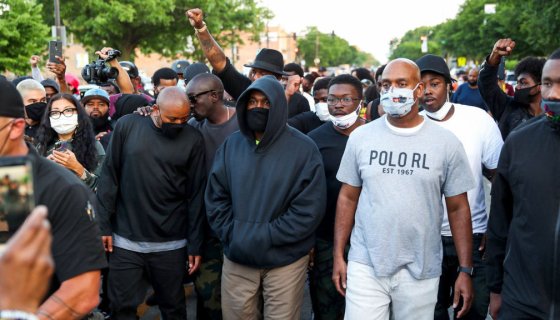 Kanye West may have been known as the Louis Vuitton Don, but his latest venture will be more affordable. The Chicago rapper, designer, and a lengthy list of other job descriptions teased a collaboration his Yeezy clothing line has on deck with The Gap.

The “Power” rapper made another return to Twitter to announce he’s dropping a collection called YEEZY Gap that if all goes to plan will debut in 2021. Check that, he’s actually partnered with the Gap.

Per the New York Times, Yeezy’s design studio is tasked with creating “modern, elevated basics for men, women and kids at accessible price points.” Reportedly, West’s vision will also entail how the collection is displayed in stores.

The Gap, which owns Old Navy and Banana Republic, truly believes in Mr. West because the deal is reportedly for 10 years (starting this month) and will have an option to tag on another five years. The deal could be a financial windfall for the brand and Mr. West. According to the NYT, based on sales the Gap will pay royalties and maybe even equity to the Yeezy brand, which is owned by West.

West has been in league with adidas since 2013 and his Yeezy kicks have earned billions, and that’s before the aftermarket price bumps due to demand. Recently, it was revealed he’ll be , too.

Lately, , West has been kicking it in his new Wyoming compound, building futuristic pods to live in and plotting some sort of artistic and aesthetic domination. He’s also , but he’s still Team MAGA, though.

Longtime Kanye West fans will certainly recall that Kanye West once worked at the Gap in retail as a teenager while he dreamed of becoming a Hip-Hop star.