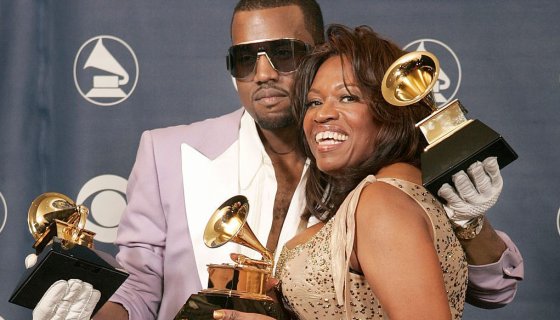 Possible presidential candidate, Coonye oops, we mean is still gearing up to drop a new album. The rapper surprised fans with a new song dedicated to his late mother.

West surprised his loyal fans by dropping the track named “Donda” on Sunday (Jul.12), which would have been his late mother’s 71st birthday. Accompanying a video comprised of clips, the song features West’s mom reciting fellow Hip-Hop legend, KRS-One’s lyrics from his classic song “Sound of da Police.”

“There can never really be justice on stolen land,” she recites the powerful lines. “Are you really for peace and equality? Or when my car’s hooked up — know you wanna follow me? Your laws are minimal because you won’t even think about the real criminal. This has got to cease ’cause we been getting hype to the sound of the police.”

In loving memory of my incredible mother on her birthday 🕊 My mom reciting KRS1 lyrics This song is called DONDA pic.twitter.com/YWKhqYYu2E

Kanye, who is not heavily featured on the track, follows his mom rapping:

“The Devil is using you / Confusing you / Our job is to understand who is who / Righteous indignation / In this nation / We gon start a revolution in this basement.”

Donda died tragically back in 2007, following complications from surgery.

His wife, and staunch supporter, Kim Kardashian West, also shared a video on Twitter of Kanye and his mom singing his track “Hey Mama” off his sophomore effort, “Late Registration.”

West has been in the news a lot lately, unfortunately. The rapper announced that he would be running for president in 2020 despite not even filing the necessary paperwork to make that happen…yet.

Yeezy also revealed that he is no longer rocking with his buddy Donald Trump stating in a ridiculous Forbes interview that he officially has. The billionaire also got outed as one of the many individuals to .

This follows the news that West is reportedly suffering from a