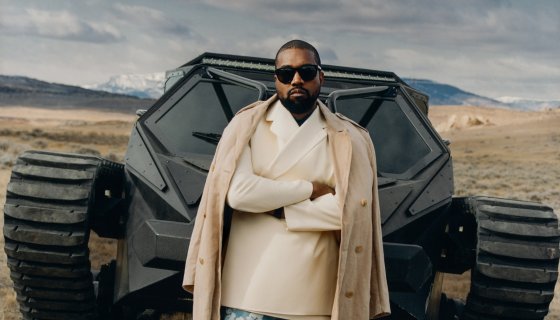 graces the cover of the May 2020 issue of GQ magazine. In case you were wondering, he says you should know who he plans on voting for in November.

Yeezy was interviewed by the men’s fashion mag’s Editor in Chief Will Welch, and their discussions reportedly spanned three countries and three months. So it goes without saying that the topics covered were wide-ranging.

Before we get to the why in the hell is Kanye West so in love with Donald Trump (who else would the vote for?) outrage, let’s look at what West had to say about the late Kobe Bryant.

“Everyone in our life is now a member of the Lakers on one of Kobe’s championship teams,” West told GQ. “The way that Kobe would say that we all have to come together and win this championship is the way I look at life now. To an infinite, other level. This is a game changer for me. He was the basketball version of me, and I was the rap version of him, and that’s facts! We got the commercials that prove it. No one else can say this. We came up at the same time, together. And now it’s like, yeah, I might have had a reputation for screaming about things—but I’m not taking any mess for an answer now. We’re about to build a paradigm shift for humanity. We ain’t playing with ’em. We bringing home the trophies.”

As for Cheeto, he’s still on his contrarian wave.

GQ: So this is an election year, and I’m curious how your faith plays into your thoughts on politics. To go back to when you put on the MAGA hat, how do you see that moment from where we are now, sitting on this plane, in January of 2020?

Would either of his parents vote for Trump, though? But West wasn’t done. Later in the interview he didn’t say names but he intimated who he would be voting for in November (he don’t vote in 2016).

What was at odds to me about you wearing the hat is that “Make America Great Again” is about looking back. Whereas, to me, you are a perpetual forward thinker.

I buy real estate. It’s better now than when Obama was in office. They don’t teach you in school about buying property. They teach you how to become somebody’s property.

For the election ahead, do you plan to speak more about it, or are your interests elsewhere?

No, I’m definitely voting this time. And we know who I’m voting on. And I’m not going to be told by the people around me and the people that have their agenda that my career is going to be over. Because guess what: I’m still here! Jesus Is King was No. 1! I was told my career would end if I wasn’t with her. What kind of campaign is that, anyway? That’s like if Obama’s campaign was “I’m with black.” What’s the point of being a celebrity if you can’t have an opinion? Everybody make their own opinion! You know?

Do you, buddy. But Donald Trump’s attempted authoritarianism and well-documented racism and ism speaks for itself. That’s not an opinion.