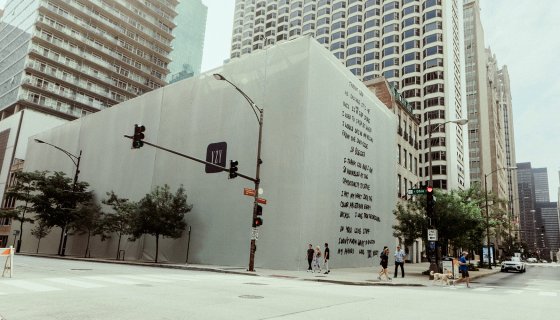 was in his bag this weekend. The “Spaceship” rapper turned a Chicago Gap store into a mural, covering it with a shroud than includes an open letter about his collab with the retailer.

On Friday morning (June 26), West announced that his Yeezy clothing line was partnering with the Gap, and he started dropping content from then on. From finally dropping the unreleased “Spaceship” video, where he portrays a Gap employee (which he actually was back in the day), to his cartoon with Kid Cudi to a documentary about his Yeezy Supply website’s redesign, West’s social media feed was busy.

But his play at the Gap in Chicago along the Magnificent Mile and located at 555 Michigan Avenue could be the biggest move, at least physically, as he shrouded the entire storefront. One side features the Yeezy x GAP logo he first revealed on Friday and another features an open letter—actually, it reads more like a poem—that takes up the entire wall.

This is the Gap store

I used to shop at when

I would drive my Nissan

I thank god and I am

so humbled at the

I put my heart into the

color palette and every

detail    I love Tron the original

I don’t know what to do with

As previously reported, . The first collection scheduled to drop in early 2021.

No word on when the store on Michigan Avenue and Ohio Street in Chi-Town will actually open. But reportedly, Yeezy had a hand in redesigning the entire store.