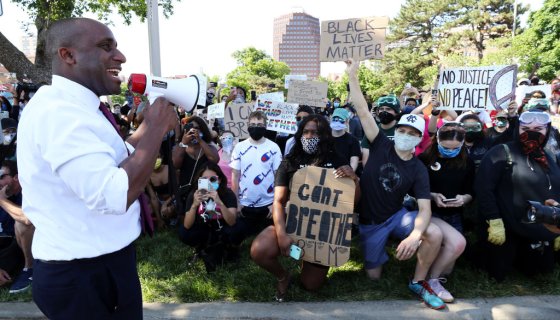 isn’t the only virus sweeping across the country, racism is also rearing it’s ugly head now more than ever.

After issuing a new order for everyone within city limits to wear a mask or some sort of face cover, Black Kansas City mayor Quiton Lucas shared screenshots of the racist texts he received on Monday. In the troubling messages, Lucas was called the N-word and told he “should hang from a tree.”

The person who sent the head*ss racist texts seemed to be responding to a poorly photoshopped photo, which falsely claimed that Lucas was pushing ant-police sentiment. Lucas responded by sharing the real the photo next to the photoshopped photo with the caption:

“Social media and photo shop are always fascinating. To the many texting me aghast of fake photos circulating, I recommend you not believe everything a muckraker sends your way… and use some judgment.”

Social media and photo shop are always fascinating. To the many texting me aghast of fake photos circulating, I recommend you not believe everything a muckraker sends your way… and use some judgment. pic.twitter.com/ebaoSi370q

“Odd to have to disprove something so patently ridiculous and nonsensical (who takes a smiling F the police photo at a rock station?), but alas, that’s 2020.”

He closed out the thread by sharing a screenshot of the texts containing the slur and saying he should be hung.

Add to this the racial slur and subtle death threat I received yesterday about requiring masks, and it’s like, y’all… let’s do better. pic.twitter.com/PWCHo912TJ

Lucas isn’t the only Black local government official to receive racists texts. Atlanta Mayor Keisha Lance Bottoms also shared she has been the recipient of hateful rhetoric on her smartphone.

With my daughter looking over my shoulder, I received this message on my phone. I pray for you.
“Conscientious stupidity or sincere ignorance.”
~Martin Luther King, Jr. pic.twitter.com/dOimv9sdN3

Since the Coronavirus pandemic, there has been a rash of racist and showing out across the country. Most specifically doing the most because they feel their rights are being infringed upon due to being told they need to wear a mask or can’t go to beaches or bars because of COVID-19  and confederate monuments and flags come down in the south.

We don’t expect this wave of racist behavior to stop no time soon as long as the racist-in-chief, Donald Trump continues to pander to these people and enable them.