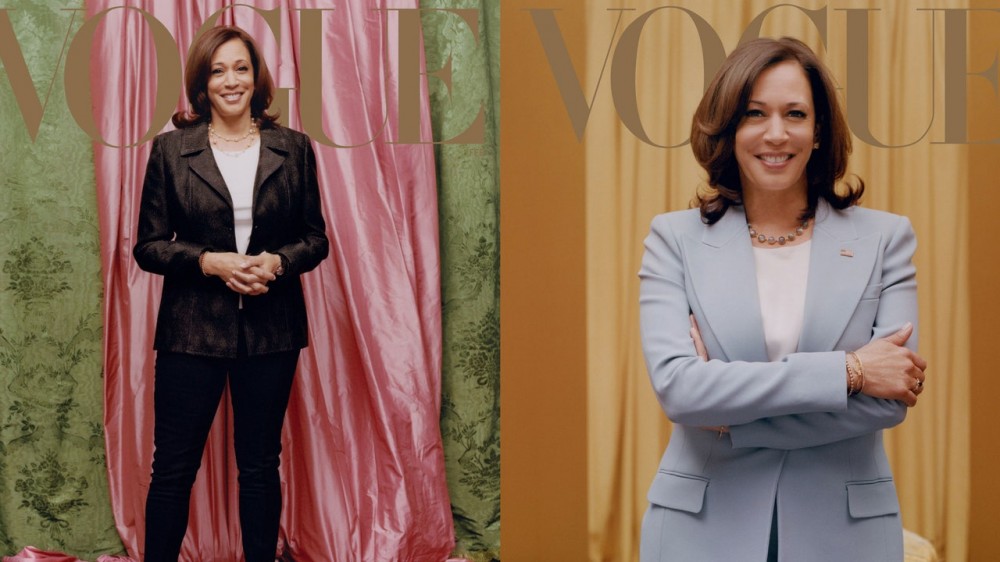 As the nation’s first Madame Vice President-elect, Kamala Harris represents a new dawn in American politics. So naturally, the backdrops for her print and digital Vogue images were going to be wholly original. Shot by Tyler Mitchell, the former reflects Harris at her casual best: Converse sneakers and Donald Deal blazer—styling choices that were her own—and a bright smile. Still, a closer look at the picture reveals a tribute to a formative chapter of Harris’s life: her time as a member of Alpha Kappa Alpha Sorority, Inc’s Alpha chapter at Howard University.

Founded in 1908, Alpha Kappa Alpha is the first historically African American sorority, and its official colors, salmon pink and apple green, are iconic. Chosen by educator Beulah Burke, one of the group’s nine founding members, the combination has remained the same for more than a century and is instantly recognizable to members and anyone with knowledge of the Greek system of sororities and fraternities. Over the years, they’ve been donned by women such as television legend Phylicia Rashad, mathematician Katherine Johnson, and Nobel Prize–winning author Toni Morrison.

The shades became a part of Harris’s life in 1986. She joined the Alpha chapter at Howard during her senior year, as one of a handful of students who were accepted into the organization at the time. The women would become lifelong friends, supporting Harris on her campaign trail. Her time as an AKA had a profound impact, one she explored in her autobiography, The Truths We Hold. “We weren’t just told we had the capacity to be great; we were challenged to live up to that potential,” Harris wrote of her university experience. “There was an expectation that we would cultivate and use our talents to take on roles in leadership and have an impact on other people, in our country, and maybe even the world.”

When conceptualizing the cover, Mitchell wanted to honor Harris’s college days and the powerful women who comprise the ranks of sororities like Alpha Kappa Alpha. The son of a Delta Sigma Theta (the second of the three historically Black sororities founded at Howard) and nephew of an AKA, he appreciated both organizations’ cultural importance. “I grew up from a young age deeply understanding the rich history of these sororities and their significance,” shared Mitchell via email. “With this cover shoot with Madam Vice President-elect Harris, I wanted the set design to pay homage to that history, her status as an AKA, and Black sororities and sisterhoods worldwide.”

Set designer Julia Wagner gave Harris a serene backdrop of flowing pastel fabric, with salmon-tone satin and apple green brocade. With Harris in the Converse sneakers that have become her trademark and a blazer designed by her friend, designer Donald Deal, the image captures Harris, the groundbreaking politician, while alluding to the path that led her to the White House. More than inspiring her political journey, Harris’s sisters and the entirety of the Divine Nine fraternities and sororities who comprise the National Pan-Hellenic Council strolled to the polls to vote for her, creating a memorable viral moment in the process. For Mitchell, that kind of solidarity and strength in numbers is what it’s truly all about. “To me, their colors conjure images of Black women standing together,” he says. “[United] in sisterhood throughout time, affirming one another.”