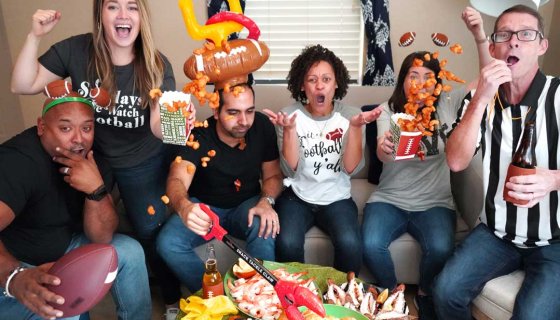 Nothing makes it clearer as to who exactly is an entitled “Karen” more than a pandemic. Footage of an out of pocket white woman getting forced out of a in Pennsylvania while she demanded a refund made it online, and Twitter has been slandering her and her minions ever since.

Reportedly it all went down on Mother’s Day in East York, PA, of course. The day reserved to big up Mom Dukes usually means packed restaurants, but during this Coronavirus Pandemic it also meant long waits for takeout, because, ya know, people were working while understaffed to make sure you got your meal.

The voice at the end of this Karen Gone Wild video at a Red Lobster in York, PA is the most Pennsylytucky thing I’ve ever heard pic.twitter.com/ewkMsM91QM

In the clip, a white woman, who is not wearing a mask, is seen getting ejected out of a Red Lobster but she is nevertheless trying to force her way back inside despite multiple employees asking her to leave. Eventually,, you can gather that she’s one of the “I want to speak to the manager types” and is demanding a refund.

After giving her name when told that’s all they need to return her money, she throws a punch at one of the employees holding her out of the store, knocking the worker’s glasses off. All hell breaks loose with Karen (not her real name, nor do we really care…okay, it’s Kathy Hill, allegedly) saying she was assaulted. This despite herself clearly throwing the first punch. Sound familiar?

All this to say, the Twitter slander has been hilarious, with Red Lobster trending despite it being Hump Day. There is also the nuance of white supremacy coming in, which is valid.

Peep some of the best reactions below.

3). Let Me Speak To Your Manager

4). This Is Unacceptable (feat. Sharon)

Not sure this was her expected outcome in slapping folks working at Red Lobster..on Mother's Day..in the middle of a pandemic, but seemed like Tiffany was finna serve ol’ girl the Ultimate Feast – snow crab claws, cheddar bay biscuits, taters, the whole nine. With no wait time.

The best part is the lady at the end yelling “y’all have us waiting 3 hours for food!” Let me tell you something, if you are waiting for hours to eat at Red Lobster you don’t deserve food. https://t.co/FsT3DnWh9d

Sorry but if you pull up to a Red Lobster that looks like this and you still decide to wait that shit is on you. pic.twitter.com/3iZRG6XpOx

You know, if you'd spent a fraction of the time you spend hating President Obama on a PLAN FOR TESTING, or just not being an asshole, it'd make a difference.

But you're STILL the same asshole who pushed Birtherism, so just as bad as a Red Lobster Karen.

None of this is about food. I hope folks know that.
Nothing Red Lobster serves is worth a 3-hour wait, even on Mother’s Day
This was about white supremacy and the power to exercise it.
PA whites are a case study.
Someone do a diss. on modern PA racism pls https://t.co/u0WhSlbPcP

Welp. DMs closed. White people have lost their minds and have decided to flood my DMs.

This country is broken. I want out.

Americans are disgusting. I hate it here. You’re upset you cant get your red lobster when ppl are literally dying and u outdoors no mask assaulting essential workers? I. Hate. It. Here. https://t.co/UPoMGtH0yi

MAGA has given permission for the worst beings in our society to behave this rabidly over some Red Lobster during a deadly pandemic that has killed 83,000 Americans. https://t.co/7NMUjCfKSq

Lmao. I went to Publix got some fresh lobster tails and shrimp and cooked it all under an hour and called it a day. Red Lobster who? pic.twitter.com/HW1LkZJ5Lh

Today we see one for Red Lobster

This wasn't a "brawl." Red Lobster workers just doing their jobs had to fend off a customer who took a swing at one of them, with no mask on, putting their health and safety at risk. People who have no choice but to go to work during a pandemic shouldn't have to put up with this. https://t.co/LCpozuBByU