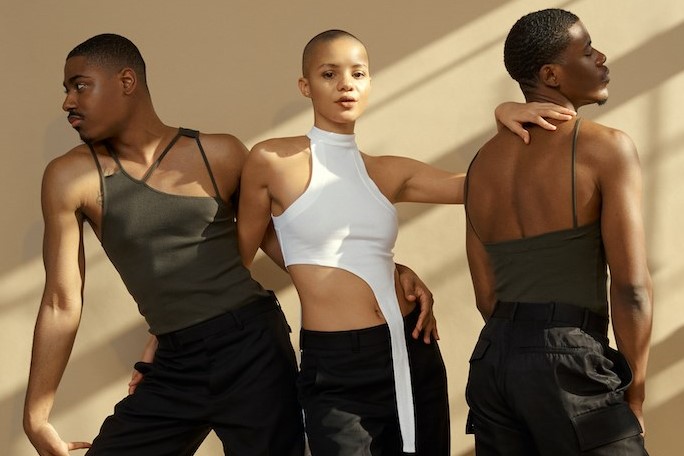 Founded by Nigerian-American designer Kingsley Gbadegesin, the NY brand is rooted in activism and authenticity

Getting its start in the summer of 2020, cult label K.NGSLEY was partly born of activism. Founded by Nigerian-American designer Kingsley Gbadegesin, the label was created to reframe the way we see Black, queer, and femme bodies, through clothing that radically deplatforms gender constructs and instead amplifies individuality.

Finding its feet in the midst of a raging virus as the Black Lives Matter protests swept the globe, from its very inception K.NGSLEY went far beyond brand – becoming a way for Gbadegesin to give back to his community and uplift those within it. “I didn’t know how to fully express what I was feeling that summer,” says the 27-year-old designer. “My Blackness, what happens to Black people across this country all the damn time, never leaves my consciousness. The anger and disappointment at the ongoing situation simmer in me constantly, but last summer it boiled over – not into an all-out rage, but in a way that propelled me somewhere different.”

In what he calls ‘an a-ha moment’, Gbadegesin, who cut his fashion teeth at Celine and Loewe, decided that his only way forward was to create with the intention of contributing to Black, queer, and trans lives: “Because after the trend dies, who I am as a person remains the same – a Black, queer, and femme person.”

Primarily, the label is about showing up as your most authentic self. As a first-generation Nigerian-American, Gbadegesin grew up straddling a culturally Nigerian burden to live for other people, and knows a thing or two about the language of resistance and the importance of existing in your truth – no matter how hard it might be to find that language and stay grounded in it.

Inspiration for the style itself struck as Gbadegesin was getting ready to hit NY rave FIST but didn’t have anything to wear. Reaching for a tank, he took his scissors and turned it into a cropped-top, and the first iteration of what was to come was born. Now, the core collection is made up of gender-blurring designs in a palette of neutral hues – but if you’re thinking anywhere along the lines of ‘basic’, think again. Crafted from high quality American and Japanese cotton, each piece bears asymmetric straps and detailing intended to show off the body, whatever your body might look like.

Elevating an everyday staple to something more meaningful, the line also seeks to dismantle stereotypical tropes surrounding Black masculinity. “Tank tops, broadly known as wife beaters, are tied into that image of Black maledom,” Gbadegesin explains. “I took that symbol and literally ripped it up. Elevated it and reworked it to reclaim it. It’s that kind of meaning shifting that inspires me, and I think it’s rare we can draw such clear and direct lines to social symbols like the tank top.”

In addition to celebrating, centring, and accommodating the marginalised bodies and faces rarely seen in fashion, Gbadegesin is also intent on giving back to his community through monetary donations to those who need it most. As well as funnelling money into initiatives like Princess Janae Place, which offers direct, on-the-ground help for trans women in need of a secure housing, K.NGSLEY also sponsors the femme queen face category of the virtual ball hosted by OTA.

“It do take nerve to exist (in the Black, queer community) and there’s something magical in that – the energy and passion they bring to the spaces they occupy,” Gbadegesin explains. “Yeah runways are fine, but have you ever been to a ball? The girls give you the fantasy. They sell it and make sure you feel it to get their 10s. There is overflowing confidence and energy and uniqueness. It’s such a rebuke to the world that oppresses us outside those walls, and that’s what influences me most. I’m designing to bring that sense of real, raw identity into the real world. Cuntfits for the girls, by the girls, that let us show up in all spaces as queer, femme, and faggoty as we are.”