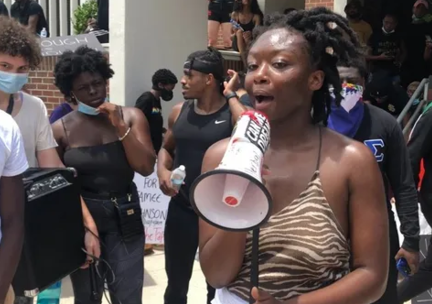 We must begin this story by expressing that the details within will be disturbing to some. Oluwatoyin Salau, a young activist who was a frontline voice in support of the movement, was reportedly found dead after tweeting about a ual assault encounter then going missing in .

Salau, 19, wrote in detail about an assault that occurred on June 6 after accepting a ride from a Black man in the city of Tallahassee. Salau, who was staying in a nearby church that housed much of her personal belongings after expressing she was staying at a place with “unjust living conditions.”

“Anyways I was molested in Tallahassee, Florida by a black man this morning at 5:30 on Richview and Park Ave. The man offered to give me a ride to find someplace to sleep and recollect my belongings from a church I refuged to a couple days back to escape unjust living conditions,” Salut wrote.

She continued with, “He came disguised as a man of God and ended up picking me up from nearby Saxon Street. I entered his truck only because I carry anything to defend myself not even a phone (which is currently at the church) and I have poor vision. I trusted the holy spirit to keep me safe.”

In an attempt to defuse the situation, Salau told the man about how a man ually assaulted her back in March in an attempt to receive some form of empathy from the man. After detailing the assault, Salau wrote that she made her escape back to the church with her belongings.

On Sunday (June 14), the Tallahassee Police Department announced that it was investigating a double homicide but did not name the victims. Via social media, two individuals claim that the family confirmed that Salau has indeed died but a formal statement from the authorities has yet to surface as of this morning (June 15).

One of the most upsetting aspects of this incident is the passion that Salau exhibited in the defense of Black men who have been slain by police, yet that did not translate into courtesy and protection for her well-being. That much has been noted by many on Twitter who say that Salau, also known as “Toyin,” fought for the very men that she was eventually harmed by.

Salau was defiant and committed to the fight to the end, writing, “The same n*ggas i’m risking my life for are the same niggas who are convinced they are stealing away my “innocence” or jewel not knowing that I am standing on a rock. Therefore I can never be broken or robbed.”

A relief GoFundMe campaign for Salau was launched and will now be used to help support the family with Salau’s brother serving as a beneficiary of the fund.

rest in power oluwatoyin salau 🤍
BLACK WOMEN DESERVE SO MUCH MORE. SHOW UP, FIGHT FOR, AND PROTECT ALL BLACK WOMEN WHILE THEY ARE STILL HERE!!! #SayHerName pic.twitter.com/azdIfxOgpG

Oluwatoyin Salau spent her last days on this Earth fighting for black lives. It’s our job to fight for her. Her life mattered.

Oluwatoyin “Toyin” Salau
Rest in Power Angel 💔 #JusticeForToyin after tweeting about her ual assault she went missing for several days and her body was recently found. She was only 19. pic.twitter.com/4uAlVsAVHK

Until I stop breathing I will never stop fighting for women. RIP pic.twitter.com/G3V8gmUK3E

Oluwatoyin Salau was a baby. She was a baby who thought she was safe in her community but her community swiftly reminded her why she was not safe anywhere. Man, this one hurt. A baby. We lost a fuckin baby because no one protects Black girls or women.

end the world for Oluwatoyin Salau

it’s breaking my heart.. you didn’t deserve this💔 thank you so much for fighting for us, i’ll never forget you🙏🏽 rip oluwatoyin salau. i wish i could’ve protected you. pic.twitter.com/pQmedEAxJA

SHE WAS 19. HER NAME IS OLUWATOYIN “TOYIN” SALAU. SHE WAS SEXUALITY ASSAULTED AND MURDERED. SHE WAS AN ACTIVIST WHO SHOWED UP TO EVERY PROTEST SHE COULD. FIGHT FOR BLACK WOMEN LIKE YOU FOUGHT FOR FLOYD. THIS IS NOT OVER. #JusticeForToyin pic.twitter.com/HrJVoKdaDT

we spread her name and story, now she’s dead. the police will be punished for their crimes against black women. they ignored her after she was molested, ignored our warnings and now she’s gone. RIP to Oluwatoyin Salau 🤍 we will not forget your fight and your power.

Rest In Peace Oluwatoyin Salau 🕊 may you always be remembered in our hearts. We will continue to fight for you. https://t.co/4K0MY4mVMh

Oluwatoyin Salau, say her name because she deserved so much fucking more…Rest in Power

Oluwatoyin Salau was ually assaulted twice this year alone, by two black men. One in March & one in June. Hopefully y'all don't skip that conversation within the community because you don't want it to overshadow our current situations. The ual assault rate of Black Women.