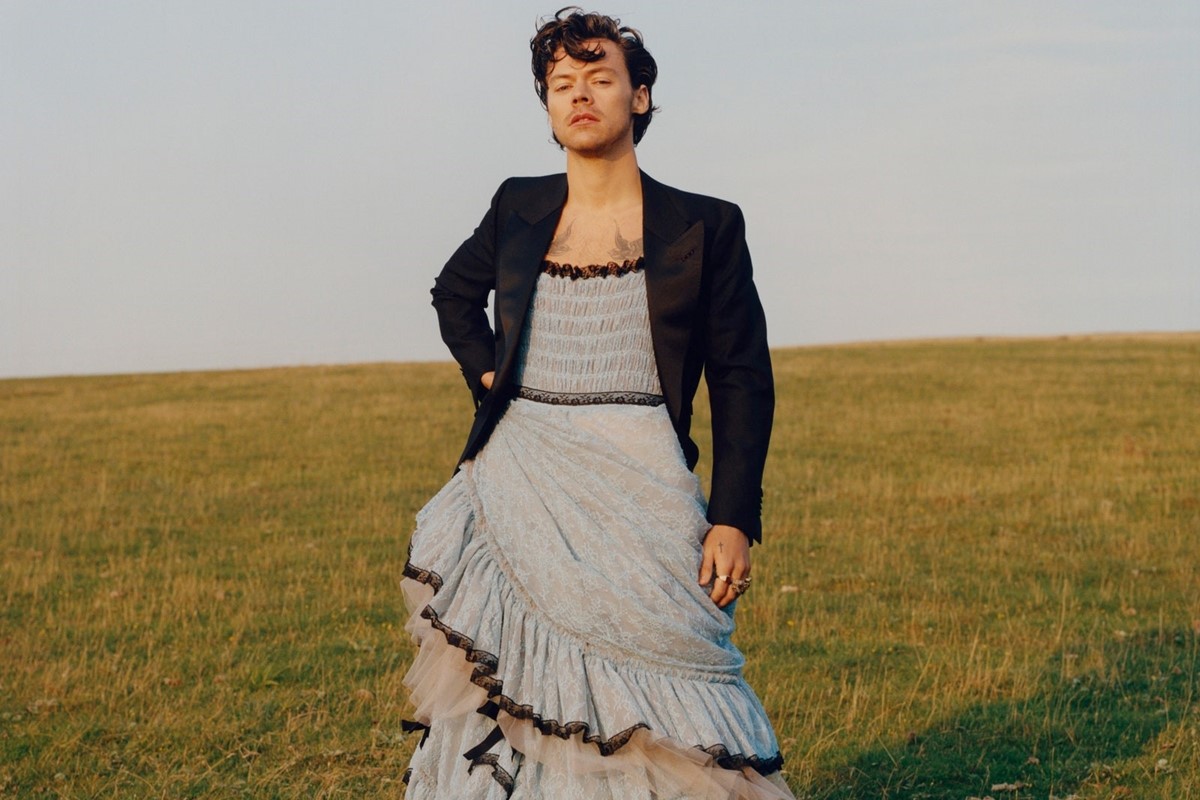 When a teenage Harry Styles first sauntered onto our screens back in 2010, the singer was dressed in a grey cardi, a scoop-neck tee, and a skinny, wraparound scarf that looked like they were picked up from River Island, AllSaints, and Camden Market respectively. Last Friday, he came close to breaking the internet as the first man to appear solo on the front cover of Vogue – marking the occasion in nothing less than a periwinkle saloon dress from Gucci’s AW20 collection.

Lensed by Tyler Mitchell, the cover was the culmination of a decade-long transition for Styles, which has seen him level up from popped-collar Topman fits to sparkling, custom Alessandro Michele. It’s been a conscientious image overhaul, articulated with sensitivity and whimsy by stylist Harry Lambert, which has edged Styles ever further from tween-friendly boyband member to swaggering, glam-rock sex symbol.

Much like J.Lo’s Google Image-birthing Versace dress or one of Lady Di’s countless revenge looks, Styles’ Vogue gown was an instant classic – with the musician’s appearance ricocheting through his behemoth social media fanbase and stirring up a similar furore to when he wore a pearl earring and multicoloured nail polish to the 2019 Met Gala. In the accompanying Vogue piece, written by Hamish Bowles, Styles is described by Michele as a “revolutionary” for his gender-defying fashion choices, which make him “the image of a new era”. Only, is he really? Is a handsome, rich, cis-gendered white man wearing an expensive dress on the front cover of a glossy fashion magazine really all that boundary-pushing?

“It’s not new or radical,” says Fenella Hitchcock, a lecturer at the London College of Fashion. “It just reflects the shifts in conversations surrounding masculinity that have been happening for a while.” That’s not to say the cover is not important. If anything, it’s the logical apex of Styles’ feminine frills, TikTok’s femboy culture, and fashion’s heady embrace of non-binary aesthetics.

In recent years, menswear has overtaken womenswear when it comes to transgressive design, particularly in its rejection of exaggerated masculine identities. Think boys in pussy-bows at Gucci, Ludovic de Saint Sernin’s barely-there breastplates, and literally anything seen on the Loverboy runway. Not to mention the dissolution of gender-specific shows altogether. “It’s Vogue being quite slow to respond to a shift that’s already happened towards less rigid approaches to categorising fashion,” says Hitchcock.

That said, it is an unprecedented move for the magazine. While Vogue is unlikely to be anyone’s go-to for radical queer politics, this month’s cover is, on some level, a powerful depiction of gender nonconformism. Remember: this is the magazine that suggested Zayn Malik and Gigi Hadid were ‘embracing gender-fluidity’ because they sometimes shared t-shirts just three years ago. And as much as androgyny is increasingly commonplace in more directional fashion circles, garments continue to be funnelled into menswear and womenswear not only on the high street, but even by luxury retailers who stock these more ‘daring’, high-end pieces.

“It’s an issue in terms of who gets to have these transgressive moments. We have cis white men who are celebrated for doing the very things that queer people do in day-to-day life all the time” – Fenella Hitchcock

The entire infrastructure of the fashion business is built on these binaries, which means that, in spite of what designers present on the runway, people still feel a resistance in displaying any kind of gender variance in real life. It creates a tension between different levels of representation and, as a result, “there’s a real hunger for these kinds of images”, as Menswear Revolution author Jay McCauley Bowstead puts it. A craving to see a dismantling of gender reflected within the mainstream. Not to mention that “it could feel really affirming” if you happen to be questioning the boundaries of your own gender, “especially if you aren’t from somewhere with a great deal of diversity”, according to the writer.

For McCauley Bowstead, though, it goes beyond this. He believes the Vogue cover leans into the queering of heterosexuality. That is, the ways in which people who are understood to be straight “incorporate elements of queer culture” into their lives. While we don’t know the specifics of Styles’ sexuality, and nor should we feel entitled to, it’s a topic which he is often pressed on by interviewers and something he skilfully skirts answering. Not because “he’s holding it back”, but because “who cares?”, as he previously told one Guardian journalist. Regardless, Styles embodies the increasing number of men who choose to reject “heterosexist dogma about how we should live our lives”, and that includes how we present ourselves. The cover is significant, therefore, as a site of contesting these normative forms of masculinity.

Except, Styles is far from being the first to do so. Music and fashion have always been spaces to renegotiate aesthetic approaches to gender. There’s David Bowie, Prince, Lenny Kravitz. Even Brad Pitt’s 1999 Rolling Stone cover. More recently, there’s been Jaden Smith, Young Thug, Bad Bunny, A$AP Rocky, Lil Nas X, and Yves Tumor, to name but a few. Perhaps we’ve forgotten that Pharrell Williams appeared on the cover of GQ just last year in a dress? In wider pop culture, we’ve seen Billy Porter and Jonathan Van Ness walk countless red carpets in ‘womenswear’. Granted, the pair could probably do with a Harry Lambert fit session (let’s be real, who couldn’t?) but it is indicative of how we read these aesthetics differently on POC or queer bodies than on publicly straight white men.

“It’s an issue in terms of who gets to have these transgressive moments,” says Hitchcock. “We have cis white men who are celebrated for doing the very things that queer people do in day-to-day life all the time.” While images like these are perhaps shocking to the standard Vogue reader, for many, it doesn’t break down a binary so much as buttress it. It’s a frustration Alok Vaid-Menon, author of Beyond The Gender Binary, eloquently expressed in an Instagram post over the weekend – “trans femmes of colour started this and continue to face the backlash from it. Our aesthetics make it to the mainstream, but not our bodies… we aren’t palatable enough to whiteness and heteronormativity”. In the context of political representation, when ‘supernova’ Styles graces Vogue in women’s clothing, it suggests we are placing more attention on certain facets of experience and identities above others. That we are again privileging whiteness, the cis male, and extolling them above anyone else.

“He’s handsome and rich so nobody has to panic,” Adam Kershaw, producer of the Queer Sounds podcast, jokes. “The mainstream just gets excited by these types of men doing something a bit queer.” As when female fans swoon over a rock star in eyeliner, there’s always a frisson of eroticism around transgressing boundaries, and Mitchell’s cover takes full advantage of this. Still, the way in which the image frames femininity, and desire, remains within fixed masculine confines. The blazer, Styles’ athletic physique, the tattoos. “There’s a defensive gesture to the posture,” says McCauley Bowstead. “It’s playing off masculine and feminine symbols in a way which feels reminiscent of classic menswear imagery.” It’s true, these shots do feel quite ‘Ray Petri’ from some 80s issue of The Face. For Hitchcock, the effect is “flattening” rather than radical: “Some people might think this is what queerness is all about – a man in a dress – when it’s so much more complex than that.”

Yet, is this Harry Styles’ fault? Far from it. Should he be framed as a flag-bearer for gender-neutral fashion? Absolutely not. So while it’s interesting that Vogue’s first solo male cover star happened to wear a dress, “it’s not something that is immediately in need of our applause” Hitchcock says. Particularly at a time when marginalised identities are so often denied their roses within mainstream culture. Styles is simply playing into a long-standing tradition of privileged artists exercising their freedom from gender constraints, and while it can be fun to watch, there’s not much revolutionary about it.