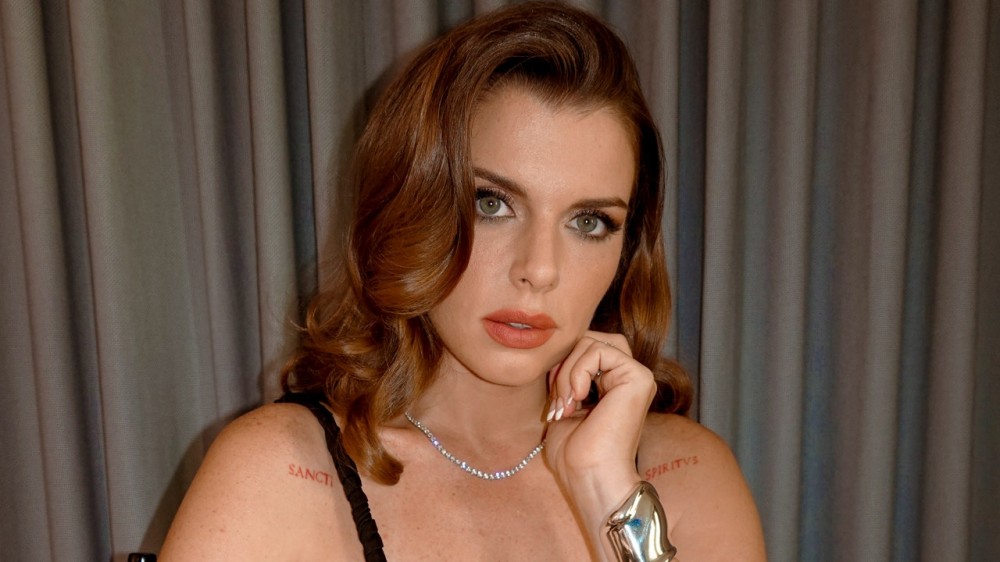 Julia Fox is a bona fide siren, a Hollywood bombshell smack dab in the middle of New York’s downtown scene. And she’s becoming more well known by the day. Her most recent role is as Vanessa Capelli, a biting housewife-mistress in Steven Soderbergh’s 1950s crime noir film No Sudden Move, which hits HBO Max today. Fox stars alongside silver-screen heavyweights Benicio Del Toro, Ray Liotta, Don Cheadle, and Jon Hamm. (She gets prime real estate in the trailer too.) This comes after Fox’s breakout role in Uncut Gems, where she starred as Adam Sandler’s character’s Roberto Cavalli–wearing sidepiece, a character who made the audience fall in love with her and projected her into fame.

Fox was raised in the New York party scene and, as such, could have been written off as just another multihyphenate. She’s been both a designer and an artist before landing her first role in Uncut Gems. Unapologetic in her style and her attitude, Fox is as unforgettable as the characters she plays. Fittingly, her style icon is Anna Nicole Smith. “I love her because she’s flawed and open about it,” says Fox to Vogue. “She’s unapologetically herself, and that’s what drew so many people to her.” Like the late Smith, Fox’s style can be classified as a bombshell but also with a bold bite. For the film’s premiere at the Tribeca Festival, she was styled by Micah Schifman and resembled a pinup girl in a strappy Armani dress, makeup by Armani Beauty, and Tiffany & Co. jewelry. It was her first red-carpet appearance since giving birth to her son, Valentino, a few months before.

While Fox considers herself a New Yorker through and through, she also lived with her mother in Milan for a year before she started high school. The polished Italian influence wasn’t lost on her. “I went there a little punk girl wearing ripped Converse and ripped jeans and punk band T-shirts and big earrings and floppy jewelry. It was a culture shock,” she says. “I really learned about fashion there. When I came back, I was wearing peacoats and Chelsea boots and coordinating my outfit and matching my scarves to my belts.”

Over the years her style has gone through a transition, from over-the-top to more pared back. “When I was working in the fashion industry, I used to be really into clothes and really into my outfits. Every day I wore something crazy, like a tutu and platforms. Then after I worked in fashion, I got so disenchanted because of all the work that goes into it and all the stuff behind the scenes that makes it so unglamorous,” says Fox. “Then I toned it down a lot.” Now, Fox relies on uniforms like a black turtleneck and jeans. “I do a turtleneck, and it is just very chic, very simple, very Milan,” says Fox. “Even though it’s a little boring, I just feel like you can’t go wrong.”

Currently, Fox’s vixen look fits right into the world of No Sudden Move. “I always tend to go toward a more bombshell, classic-Hollywood type of vibe because I feel like it fits me really well,” says Fox, who has worn classic black sleeveless dresses, a lace bodysuit, and a mod turtleneck-and-miniskirt set on the red carpet. “I wouldn’t be surprised if I were to get cast as a 1950s Hollywood type of person in other projects. It just works.”