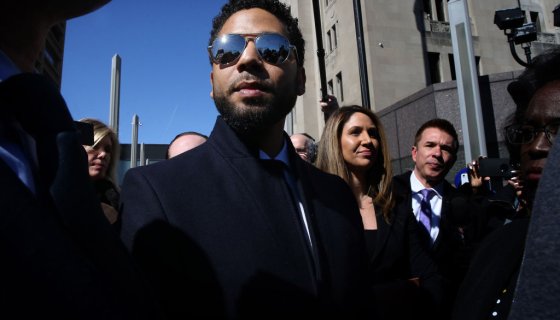 finds himself indicted, again. Today (Feb. 11), in Chicago grand jury indicted the now-former Empire actor on charges that he staged a hate crime, on himself.

According to the Chicago Tribune, Smollett was indicted on six counts of disorderly conduct for allegedly making false reports on four separate occasions. Special Prosecutor Dan K. Webb announced the charges. He was assigned after a judge determined Cook County State’s Attorney, Kim Foxx, had mishandled the case.

About a year ago, Smollet had been charged with filing a false police report. The police contended that Smollett paid two brothers to stage the hate crime where he claimed he was assaulted in Chicago by men who said “This is MAGA country” while yelling racist and homophobic slurs at him. They also put a noose around his neck and poured a substance on him, allegedly.

The Chicago PD was convinced Smollett and the brothers conspired to stage the attack, despite none of the evidence, such as texts, ever explicitly saying so, while Smollett said he paid the brothers was to train him at the gym.

Initially, the charges against Smollett had been . The actor has always maintained that he was indeed the victim of a hate crime despite what police considered a lack of evidence to confirm his account.

Smollett is due in Cook County court on Feb. 24.

Question, did the Chicago PD ever have this much energy or R. Kelly or the ?