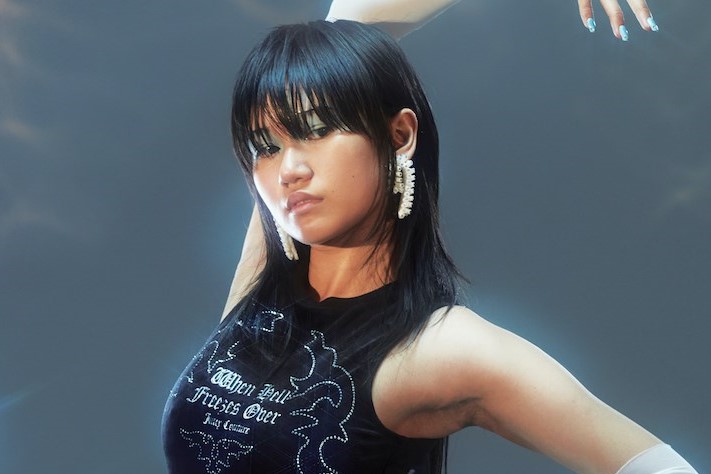 Juicy Couture’s Amy Gibson may have left Ivy Park behind, but the athletic influence that underpins Beyoncé’s label still runs deep. Heading up the iconic 00s label’s design team since joining the Juicy fold in 2019, this season, Gibson turned her attention to some of the world’s most legendary sports women, both past and present, when it came to her search for inspo.

“Figure skating was a massive inspiration for us, particularly vintage imagery from the late 80s and early 90s – we looked to so much incredible grainy footage from competitions,” she reveals. “And of course, in exploring skating we were heavily influenced by Tonya Harding, an icon!”

Elsewhere, record-breaking American gymnast Simone Biles, recently in the headlines for bravely putting her mental health before Olympic trophies, was also on Gibson and the team’s moodboard. “The figure-hugging styles (they both wear) are so overt and embellished, and are completely symbiotic for Juicy,” she adds.

Also channelling “resilient” women as diverse as Doja Cat, TLC, and the power-shouldered cast of Dynasty, the collection itself is made up of core classics and reimagined styles. So yes, the label’s inimitable velour tracksuit still features heavily, only this season it’s been reimagined with a nod to the late 80s.

“It’s made in our ultra velour, with a bit of added drama through exaggerated shoulders and an emphasised, deep-sculpted waistband,” Gibson explains. “My absolute favourite is the western diamanté tracksuit and the matching dress set – just the right amount of extra, but super cheap. An ode to the rhinestone cowboy, with a Juicy twist. Both styles are our ‘formalwear’ in a sense. As a designer it’s such a thrill to explore what this brand means beyond the tracksuit, as true ready-to-wear.”

Rounding off these crystal-encrusted styles are oversized puffer jackets, blown-up, XXL hoodies and track tops that channel 90s hip hop, and an oversized, stand-out faux fur coat emblazoned with Juicy’s striking monogram, as well as jewelled mini bags and some brilliantly hefty, candy-bright doorknocker earrings. Imagine Dynasty’s iconic bitch Alexis Carrington had she been given a Y2K makeover and you’ve pretty much got the idea.

The collection gets its reveal in a hazy, softly lit campaign courtesy of photographer Aidan Zamiri and stylist Georgia Pendlebury. Check it out in the gallery above and head here to shop.