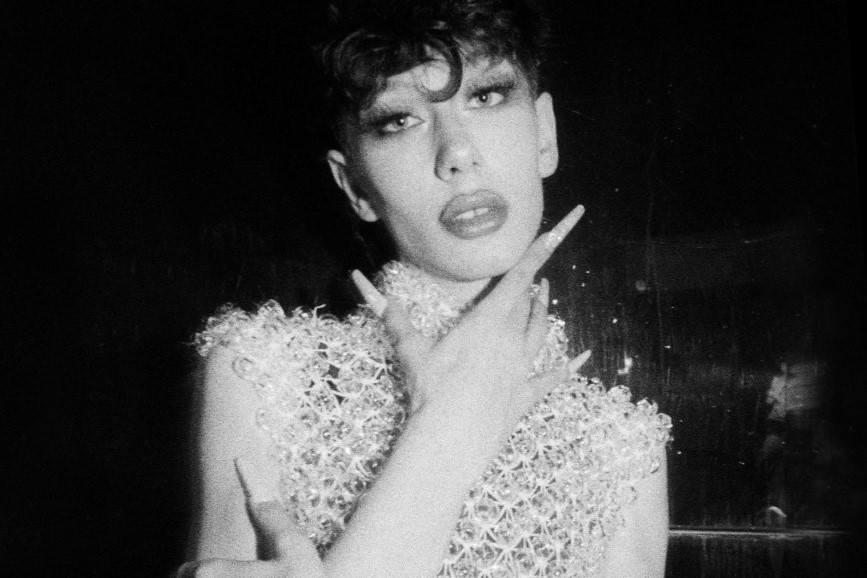 Joshua Gordon’s work has often been described as unsettling. Only, that’s not something he’s ever been particularly comfortable with. “I want to make images rich with emotion,” he says, “I want my photography to be raw and confrontational, to represent people who aren’t usually represented.” His latest project, a collaboration with Bottega Veneta on the label’s third installment of its digital zine, sees the Dublin native turn his lens towards a group of renegade teens as they get ready for a night out, intrecciato clutches hooked under their arms as they fix their lashes and fade into the tungsten-lit, tinsel-strewn holes of East London.

On the precipice of adulthood, Harri, Blue, Cam’ron, and Yufial spend their weekends voguing at balls, modelling, and making TikToks. But they mostly just want to wear Von Dutch and get drunk. As they proffer the slinkier side of Bottega Veneta’s AW21 collection, these (real life) pals find themselves in stellar company, among them Nan Goldin, Raheem Sterling, a checkerboard Honey Dijon, a fuzzy-tentacled Stefano Pilati, and Tyrone Lebon. And, as dingy and dark as Gordon’s pictures might be, the photographer finds tenderness in his subjects, reflecting back his own feelings of loneliness, loss, and fear. As an artist, he is magnetised by society’s outsiders, of those who live on the brink of exclusion – be it trans communities in Cuba, juggalos in Ohio, or dominatrixes in London.

Gordon’s woozy, black and white imagery illuminates drab brothels, dank bedrooms, and dim backstreets with compassion and curiosity, his characters staring directly into the barrel of the lens, plain and without pretension. “I don’t like mystery or mysterious people,” he admits, “I find them a bit cringe.” Here, we catch up with the photographer on working with Bottega Veneta, voyeurism, and confronting your shadow. Flick through the gallery above to see the complete shoot, or click here to visit 0.3.

Hey Joshua! Can you talk us through your collaboration with Bottega? What was the cataylst for these images?

Joshua Gordon: The kids came first. I hadn’t really thought of an idea until I found them. But once I did I created this little story about them getting ready together, doing each other’s make-up, partying together and then walking home. It was all about putting them in a fun space – made by set designer Siobhan Walsh – somewhere that felt natural, with pictures of themselves on the walls, some of their toys and pillows.

Then I just let them be themselves and tried to pluck out tender moments amongst what would normally be quite a sterile setting. They are a great bunch. Some of them go to balls, some of them vogue, some of them make TikToks, some of them want to model, and some of them just wanna get drunk. I remember being 17 and all I wanted in life was respect, guidance, and to make fun work. I hope I created that environment for them. I look forward to seeing what they end up doing, either together or alone, in the future.

“I don’t like mystery, or mysterious people, I find them a bit cringe. I like loud, intense, open characters. I’m shooting my whole life as a documentary project, total access. I am an open book” – Joshua Gordon

And they’re an actual friendship group in real life, which makes it feel that much more authentic. How did you all come into each other’s lives?

Joshua Gordon: Sarah Small is the best person at casting I’ve ever met. She finds incredible kids. We’ve actually been working together for years and she’s got an amazing knack at finding interesting people. It was important for us to find genuine people so that their interactions were real. Harri, Yufial, Cam, and Blue were so sweet and they’d known each other for a long time – none of them had been shot before, though, so making the experience good for them was paramount. And I’m so thankful that Bottega Veneta was so open to shooting something different.

Your photography always captures people on the fringes of society. Are you ever worried about that seeming exploitative or voyeuristic?

Joshua Gordon: Isn’t all photography voyeuristic? I put a great deal of effort into establishing relationships and showing respect to the people that I shoot. Most of us become friends, so I’m happy within myself. But, of course, when your photographs enter into the real world many people have questions about your intentions – no matter how pure they were when you were making your project. All we can do in this field is try our best to treat people how they should be treated and represent them truthfully.

How is your relationship with photography changing at the moment and where do you see it going? Are you still pushing your art into other mediums?

Joshua Gordon: After 10 years of doing traditional documentary work I felt incredibly restricted by the medium. I felt boxed in and needed an escape. I wanted to push myself to make images in a different way. So my relationship with photography is still there but it’s different now – I never saw myself as a documentary photographer, I want to be an artist and have total freedom to experiment with different mediums.

Your pictures are almost always described as “raw and unsettling”. Do you think that’s an accurate summary?

Joshua Gordon: I want to make authentic work. No frills and fancy lighting, no assistants, no crazy backdrops. For me it’s about the energy, the emotion, the subject, and my relationship with them. I wouldn’t call my work unsettling, though. I want to make images rich with emotion. I definitely want my work to be raw and confrontational and I want to represent people who aren’t usually represented, that’s important for me.

You seem unafraid to confront yourself within your work. Be that love, intimacy, or sadness. Why do you think that is?

Joshua Gordon: I’m a really open person – all of my favourite art, music, and film is full of emotion, and all of my favourite artists present all of themselves in their work. I don’t like mystery, or mysterious people, I find them a bit cringe. I like loud, intense, open characters. I’m shooting my whole life as a documentary project, total access. I am an open book.