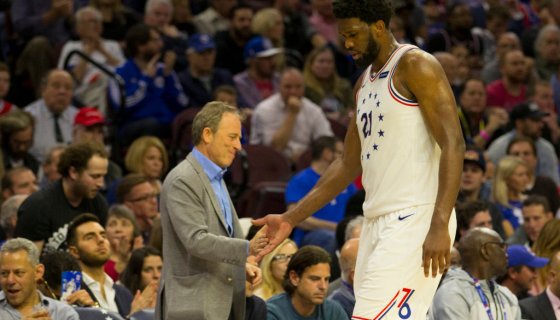 is doing his party during the Coronavirus Pandemic, donating money for COVID-19 medical aid and to Sixers staffers not getting paid during these tumultuous times. However, a number of people are wondering if the star player is opening his wallets, what’s the team owner doing?

76ers star Joel Embiid says he is donating $500,000 to coronavirus relief and helping team workers who are temporarily reducing their salary during pandemic.

As for Embiid, he’s donating $500,000 for medical COVID-19 relief, and is pitching in for team staff who have to take a pay cut.

According to ESPN’s Adrian Wojnarowski, 76er’s employees are getting squeezed to take a 20% pay cut due to the NBA’s suspension.

Members of Sixers coaching staff and front office on contracts have until Thursday to agree to 20 percent salary reduction, sources tell ESPN. Among many so far, there’s apprehension on committing to giving back money — especially with uncertainty surrounding employment futures.

That’s awesome on Embiid’s part. But Twitter was quick to point out that Sixers owner Josh Harris is rolling in dough, so why is his own employee helping out other employees? Peep the reactions below, and expect some spin from Harris sooner than later.https://twitter.com/DerekBodnerNBA/status/1242488213186412545

Joel Embiid just donated 1.4% of his net worth.

This is a great job by @JoelEmbiid . While #Sixers owner Josh Harris is taking back from his employees Embiid is putting in and is helping team employees. Great job Jo Jo. @SportsRadioWIP https://t.co/yick47oP8R

Tired: becoming a Flyers fan because the Sixers suck and they were on a wild run

Wired: becoming a Flyers fan to root against the Devils so that Josh Harris can lose money

Imagine letting your franchise player contribute more than you, the OWNER.

Josh Harris is a shit stain.

Josh Harris will make a fortune off this economic disaster. His Apollo Group will use their billions to acquire distressed companies, strip them and flip them for profit. Forcing Sixer employees to take a pay cut is par for their typical filth

Sell the team to Embiid, you bitch

Josh Harris really is a scumbag man, Joel shouldve never been put in this situation to begin with https://t.co/ZEYh45dJuK

The outrage of fans tonight on twitter over decision by #Sixers owner Josh Harris to cut salaries makes me proud of fans. According to sources I will tell you blame should be the 2 people named in this tweet. Sources within told me one of owners Michael Rubin outraged by decision https://t.co/2ru77lrRl9

joel could have donated this money long ago, but he waited til it was the perfect time to do a good deed and humiliate josh harris. once again, joel embiid is my favorite person. https://t.co/8CHkGYRlvp