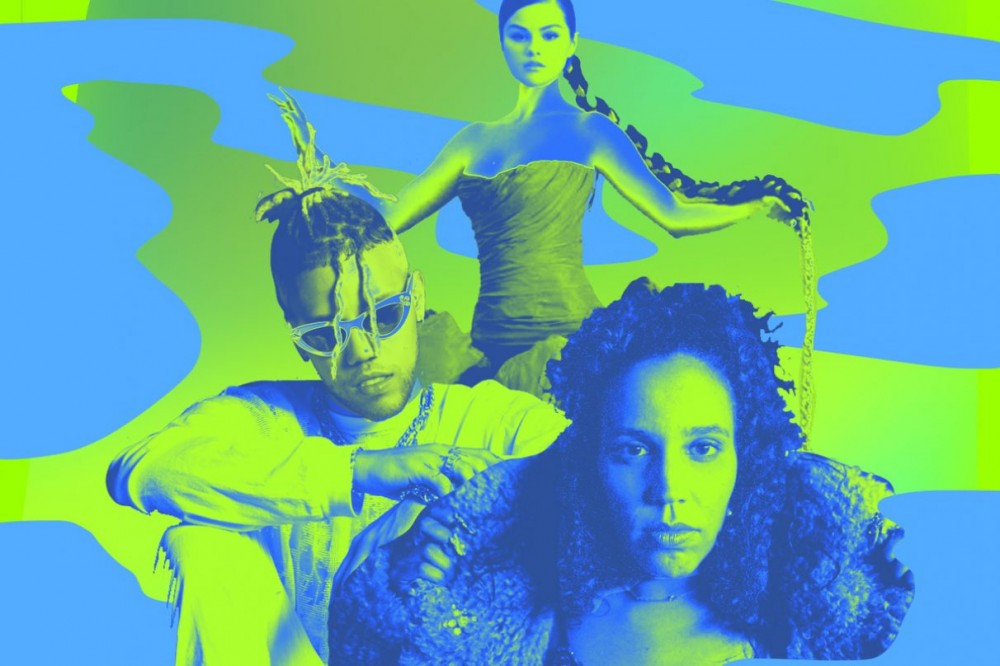 This is a weekly compilation of bite-sized song & EP reviews from our music writers. Discover new favs, read nuanced criticism of the week’s hottest releases & more.  Follow our playlist featuring these tracks and more on Spotify or Apple Music.

With his brand new single, Jhay Cortez casts himself as the host of a party that evokes summer nights where tanned bodies get closer to each other through the beat. The song may not break the two and a half minute mark, yet the song goes through enough peaks and valleys—from subtle grooves to full-on dirty perreo—that it becomes a small epic of a tune. It’s a shame that we can’t get down to “Christian Dior” at the club since it’s custom-made for it. —Marcos Hassan

Who doesn’t love a two-for-one deal? For the last few years, Selena Gomez has dipped in and out of center stage, focusing on finding closure and taking care of her mental health. Now, the Texas-born singer of Mexican descent is back with a follow-up to Rare, a pivot that will likely garner attention for its danceable collaborations with Myke Towers and Rauw Alejandro; but it’s the sweet and salty “Adiós” that takes the cake for me—a rebrand and post-breakup glow-up track in one, this song serves as the perfect hello to a new self and simultaneous goodbye to old lovers. A special jawn for a party of one. While it was evident or at least easily predictable who “Lose You to Love Me” was for, here, Gomez makes one thing clear: “Bye, this isn’t for you.” —Ecleen Luzmila Caraballo

“Nós” means “we” in Portuguese, and Elza Soares’ latest release perfectly represents a collective effort put together throughout the decades. Composed by Tião Carvalho, a major keeper of northern Brazilian folklore, the song was first recorded in 1988 by singer Ná Ozetti. “Nós” only became famous twelve years later due to the raspy acoustic interpretation of Cassia Eller, one of the latest Brazilian rockstars. Facing the future, but keeping an eye on the rear mirror, Elza Soares and producer Rafael Ramos decided to bring to life their own intent. What they’ve accomplished is a modulated-synth, unusual samba-waltz overruled by the almighty voice of 90-year-old Elza, a living legend of Brazilian music. —Felipe Maia

Riding high after her acclaimed performance as trans actress, singer and sex worker Cristina Ortíz Rodríguez in Spanish drama Veneno, Jedet is finally back in the musical waters that first made her a star. On “Te Arrepentiras,” the multifaceted singer boldly embodies a post-break up glow, sounding like Amy Winehouse on a ‘90s alt rock kick with a statement-making music video about trans sisterhood and the ways the community shows up when you need them most. —Richard Villegas

With just one single released, Bando À Flor da Pele can already claim a seat at the table of big indie bands from Brazil like Orquestra Imperial, Academia da Berlinda or Fino Coletivo. It’s not a matter of members quorum: it’s a feeling, a mood. They’ve done that with keys’ interchanging dialogs, upbeat chords and the cheery persistent phrases of “Feira Jacobina.” The lyrics are about a trip between the small cities of Feira de Santana and Jacobina. Evoking Tito Puente’s standards and smoothy salsoul orchestrations, the song reassures that young newcomers in Brazilian music like Bando À Flor da Pele also see themselves as Latine music-makers. —Felipe Maia

Xenia Rubinos – “Did My Best”

In case you missed it, Xenia Rubinos just dropped one of the best songs of her career so far. “Did My Best” deals with grief and sudden loss, feelings all too familiar for many this past year. Using scarce elements like a fat bass line, synth decorations, and support from a vocoder, Rubinos makes the song rumble with passion, as she lays every word down with urgency, as if each terribly important—because they really are, and we needed them. —Cheky

São Paulo singer/songwriter and Terno Rei frontman Ale Sater is days away from dropping his second solo EP, Fantasmas, following up his single “Nós” with an acoustic marvel called “Peu.” Although it features a tricky time signature and a sudden mid-song left turn, Sater takes us by the hand with his fingerpicked guitar, gentle piano strokes, minimalist electronic production, and soothing voice like a father guides his child through the lights and shadows of this world. —Cheky

Spanish dance music legends La Casa Azul have unveiled a brand new single titled “Entra En Mi Vida,” delivering a much needed dose of romantic optimism to warm up our final days of winter. “Entra En Mi Vida” has the revitalizing power of the sun bursting through dreary rain clouds, weaving a charming tale of serendipitous love and building to massive orchestral heights as if echoing bombastic anthems from The Beatles or Tears for Fears. —Richard Villegas

Once upon a time, synths were the instruments of tomorrow. In a way, this statement became true but some sounds have an inherent nostalgia factor to them for those of us who grew up watching ‘80s movies. Mexican experimentalists Concepción Huerta and José Orozco Mora take a surprising turn towards melodic material with plenty of droney soundscapes and distorted synth tones that give “Nuestro Presente” a dramatic shade that reminds us of a future that never was. —Marcos Hassan