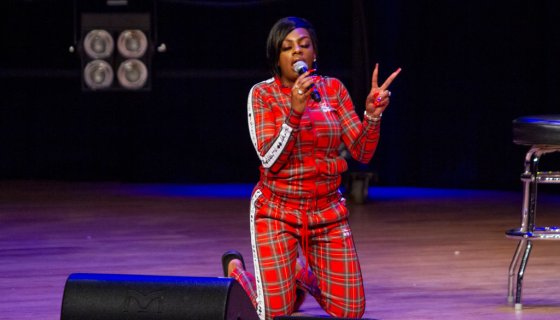 has once again landed in the hot seat once again, this time the problematic comedian is being dragged after attempting to call out the cancel culture—a decision that didn’t prove to be a good one.

On Saturday (Jun 6), Jess Hilarious took to Instagram with a passionate post, calling out the cancel culture for being too quick to cancel out celebrities without understanding their individuals.

”I see that Tee Grizzly and Queen Naija have a song together that they created for Black Lives Matter”, Jess said. “But when you look in the comments, all see is comments about ‘ain’t she a colorists’ and negativity like that, but who cares? I thought the point was to support the movement?!”

Although initially Jess’s points could somewhat seem valid, the understanding was short lived after the Baltimore-bred comedian decided to expound on her thoughts claiming that Black Twitter is going to end up canceling everyone with a platform, a remark that quickly got her gathered by Twitter.

”Ya’ll talking about we want Lauryn Hill, we will be waiting until next year my n*gga like ya’ll need to take what we give you,” Jess said. “Ya’ll don’t have a f*cking platform, but y’all trying to cancel everyone with one.”

Jess Hilarious said “y’all don’t have no fucking platform, but y’all tryna cancel everybody with one” forgetting we the ones who gave them a raggedy ass platform. So we give, so shall we take away if y’all just being blatantly ignorant.

While many on Twitter pondered on her relevancy, others pointed out that her own problematic behavior with the and people of color after she was on the cancel block in k passengers who were boarding a flight that she claimed “made her uncomfortable”, before calling them terorists.

“If I’m scared, I’m scared,” Jess said at the time, following criticism. “Fuck y’all. Fuck how y’all feel. Y’all mad at me because I don’t side with every other black person. Because I don’t side with every other race—fuck y’all. I feel how I feel, I felt threatened, and that was it. And I’m not flying there. We were evacuated, bitch! Why? Why, with no reason explained at all, no technical difficulties or nothing. Y’all gon’ listen to Jess with the mess one day, because my news is real.”

Jess Hilarious gettin mad people are being held accountable for their words. The same Jess Hilarious that racially profiled someone brown on a flight indicating he was on some terrorist shit? Chile bye. pic.twitter.com/5BrW7yalTB

While the general consensus was to cancel, it was few fans who ultimately agreed with Jess’s rant, calling out Black Twitter for being quick to cancel Black celebrities but not companies and their white counterparts.

jess hilarious has a point. y’all be so quick to cancel somebody that’s black but y’all still dropping bands on foreign designer clothes that don’t give a shit bout y’all lol

Check out Jess Hilarious’s rant and Twitter’s response below.

DEAR BLACK!!! (And I ain’t cancel TRINA, nigga YALL did. I followed up with a post to show her WHY we were mad! I’m not a bandwagonning ass person …I was REALLY angry at her! Just like y’all…but give her some time. She’ll be ok. And we’ll forgive soon enough

If y'all canceling Jess Hilarious can yall please unfollow her. Im tired of us canceling people and they still have a million followers.

Jess Hilarious fell off bad. Bitch was never funny. She need to give it up she annoying asf

I still can’t believe Jess Hilarious said if we cancel everybody who are we going to have like she was famous famous 😂😂😂 like people like LeBron ain’t standing up and doing and saying all the right things. That’s the point we should cancel all these coon ass celebrities

Jess Hilarious just digs a deeper hold for herself everytime she opens that cretinous mouth of hers. How is it we don’t have a platform but we gave you one to make daily Instagram videos & get a check for it.

Tiffany Haddish And Jess Hilarious are the same type of funny……….not at all

Terry Crews is a whole coon

I knew once Jess Hilarious posted that video saying the dumb shii she said that she would be the next person dragged as she should. I’m here for it cause she has repeatedly said dumb & foul shit. These folks get a platform and forget who built them up. It’s nothing to cancel you pic.twitter.com/9dVBL5tktQ

LMAO at y'all canceling Jess Hilarious yet again!! Isn't she the same chick y'all canceled for ignorantly racially profiling the sikh man on her flight??

Chileeee… Let me get back to work. pic.twitter.com/2P0ZqqSgDS

I was done the moment Jess Hilarious couldn't last on wild n out, she's not funny, NEVER was and fuck your platform, WE DONT NEED YOU BOO pic.twitter.com/G34d48SIC2

I knew once Jess Hilarious said something about the Deltas that her time would be coming to an end very soon lmaoooooooo pic.twitter.com/kOuCauGo9o

never paid Jess Hilarious any attention until she said what she said about them guys in Sikh's, and from there I paid even no more attention until now to tell everyone that.. pic.twitter.com/FJabjN27yK

I stopped fucking with Jess hilarious every since she refused to get on the plane because of the 4 sikhs passengers. And her excuse was Soooooo fucking ignorant it blew my mind. So get her the fuck outta here pic.twitter.com/C0gfEgsviF