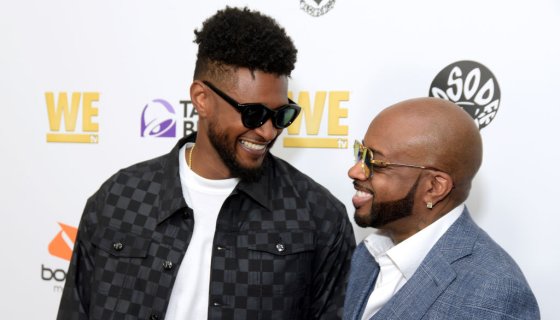 After a clip hit the web of performing his unreleased track “Confessions Part 3”, many fans took some of the lyrics to mean that he was really confirming a rumor that he has herpes—but according to friend and collaborator , fans are bugging.

On Wednesday (Feb. 26) Jermaine Dupri took to Twitter to dispel rumors that the unreleased track served as a real confession for Usher’s health, instead clarifying that the song is the third installment to the series noting that it’s actually written from the woman’s perspective.

“I see y’all trippin… CONFESSIONS PART 3 is from a females perspective,” Dupri wrote. “The song is about a girl cheatin’ on him and gettin’ pregnant by another man. She is then being stuck with the decision to keep or abort it.

Now that he knows, Should he stay or Leave ???”

The song is about a girl cheatin’ on him and gettin’ pregnant by another man. She is then being stuck with the decision to keep or abort it.
Now that he knows, Should he stay or Leave ???

Rumors began swirling after Usher teased the unreleased record during a performance at Live from the Cricket Lounge. After the clip hit the internet, fans began misinterpreting the lyrics and in true Black Twitter fashion—the jokes began to fly.

A blog posted usher singing “confessions part 3” … why someone in the comments said “these are my infections” 😂😂 pic.twitter.com/wMr8u9Zeib

The actual lyrics to the song clearly back Jermaine Dupri’s interpretation of the track, which also references “Confessions Part 2.”

“Remember that time I was sitting up sick, couldn’t sleep in the middle of the night? / You said bae let me take you to the ER, I said, ‘Nah, Imma be alright / Well the next day I found out from f*cking around that the sickness I had was life / And I was fixed with the decision to keep it, knowing I had to get rid of it, rid of it, live with it,” Usher sang.

“Confessions Part 3”, which continues where “Confessions Part 2” left us in suspense, reveals the woman’s response to Usher admitted to cheating on his girl and the other woman having his baby—with a secret of her own. However some fans believed he was addressing his , when a woman accused —which Usher before the .

In other Usher news,  the singer/ actor is getting ready to hit the big screen in the new film Burden. Set in 1966, the film, which is based on a true story, is about an orphan raised within the Ku Klux Klan who is persuaded to leave by his girlfriend and grows to denounce the Klan. When the Klan seeks him out for vengeance, a black congregation led by a benevolent reverend, played by , take him, his girlfriend and her son in.

Burden is set to be released on February 28, check out the trailer below.