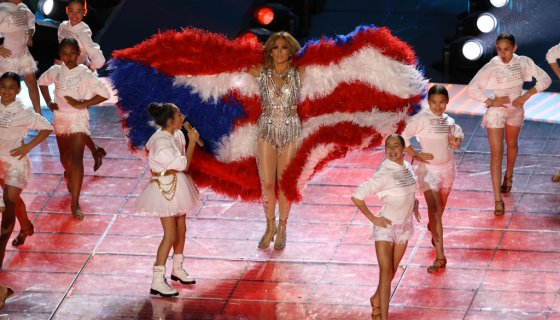 and may have shut down Halftime during the Super Bowl, but their amazing performances was no match for the blatant racism and criticism of MAGA Twitter.

On Sunday (Feb. 2) a powerful and culture filled performances which included a medley of their hits, a performance by rapper , and also a poignant message regarding the social injustices that are effecting the Latinx community.

As was finishing her “Dance Again” hit, Hard Rock Stadium turned dark –– only to be brightened by her daughter Emme and other children who were caged in neon structures. While moving out of the cage, Emme began to sing the opening lyrics of “Let’s Get Loud” and cameras focused on kids with sweaters that had U.S. flags on them.

Many on social media believed it was a call for attention to Trump’s “zero tolerance” immigration policy, which split up hundreds of parents and children at the border; while the American flags and J. Lo singing Bruce Springsteen’s classic hit “Born in the USA” before donning a Puerto Rican flag cape points to J. Lo shining a light on the deplorable condition that (which is part of the United States) in after continued natural disasters devastation.https://twitter.com/DavidBegnaud/status/1224411004714586113?s=20

, Puerto Rico was hit with a 4.7 magnitude earthquake, kicking off a series of seismic events on the island, with more than 2,000 tremors occurring since the original quake; leaving the island’s three million people in fear, and wanting for aid.

Either way, MAGA Twitter was not happy, taking to social media to broadcast their hate and clear ignorance.

This is why we have to build the wall. #SuperBowlHalftimeShow

Despite the ignorance being spewed, the messages being conveyed were loud and clear and the fact that two women of color over the age of 40 are still able to not only command a stage but dominate entire conversations proves that the choice to perform was a calculated risk that paid off.

“The Super Bowl is a very American event, as American as it can get,” Shakira said during Thursday’s NFL-sponsored press conference. “It’s also going to be a reminder of the heritage of this country, which is one of diversity.”

Check out the amazing performance and some of the reactions below.

The #HalftimeShow2020 literally showed children in cages. A crucial reminder of Trump’s relentless cruelty, made even more necessary because, like a dictator, Trump is restricting #pressfreedom at the border. #freespeech2020 pic.twitter.com/a26PiqFOuR https://t.co/YYdelo6bFm

I DID NOT KNOW I HAD ALL THIS FEELINGS IN ME!

Trump was offended by the Super Bowl #HalftimeShow2020. Offended he couldn't stand in the dressing room and watch them change like he did when he owned the Miss Teen USA pageant.

Theres a whole lot of people who don't season their chicken talking shit about the #HalftimeShow2020. pic.twitter.com/RetoleVong

That’s it, I’m officially old. Because this is turning my stomach. #SuperBowl #SuperBowlHalftimeShow #HalftimeShow pic.twitter.com/H4YgcPfC7g

Edited it to conform to rules. Strangely enough only had to edit the "respectable" one. #HipsDontLie#HalftimeShow2020 pic.twitter.com/RyhmiTiM2D

I am laughing my ass off at all these MAGAts clutching pearls at the half-time show. It was a brilliant show and a slap in the face to Christian sharia. These women own their bodies, much to the chagrin of the evangelicals. #HalftimeShow2020

According to some, the Latina superstars were too y and it wasn't family friendly enough. But this is happening every NFL game. So… #HalftimeShow2020 pic.twitter.com/Y9vR6se18l