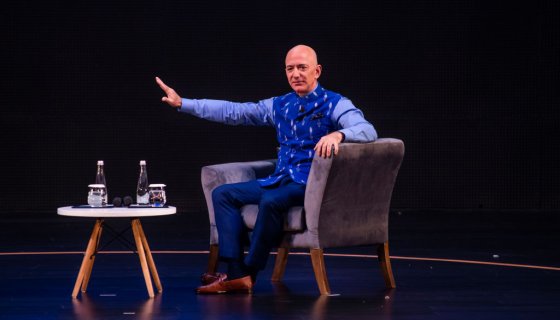 Billionaire philanthropist and Amazon CEO  might look like Lex Luthor on the outside but he’s every bit a Jimmy Olson on the inside. At least when it comes to Lizzo.

During last Sunday’s Super Bowl’s festivities, the richest man in the world geeked out when he ran into one of the biggest stars in music entertainment and took to Twitter to reveal he’s “100% @lizzo’s biggest fan.”

While the tweet seemed innocent enough, the Twitterverse was not impressed and went on to call him out for paying zero taxes for his billion dollar conglomerate while everyday Americans hustling 9 to 5’s continue to make ends meet. Not to mention the fact that his employees constantly complain about the abusive conditions they’re subjected to while getting minimum wage. This past December alone Amazon workers joined a activists outside of Bezo’s $80 million dollar penthouse in Manhattan to protest Amazon’s warehouse working conditions.

Peep some of the responses to Bezo’s pic below and let us know your thoughts on the reactions.

Good God— this level of GREED is just SICKENING.

I’d go to JAIL if I paid ZERO taxes!

Jeff Bezos, how do you NOT in GOOD CONSCIENCE contribute your FAIR SHARE of TAXES to support the NATION that enables you to accrue so much wealth— or to support the WORKERS who help create it? pic.twitter.com/HffQQXKyf4

damn bro you look like a james bond villain who hoards all his wealth and abuses his employees, oh wait

Did you tell her you’re 100% that guy who advertises on Breitbart when 623 of your employees asked you not to?

straight up you scare the piss out of me jeff. if i was ever in a room with you i would call 911 immediately