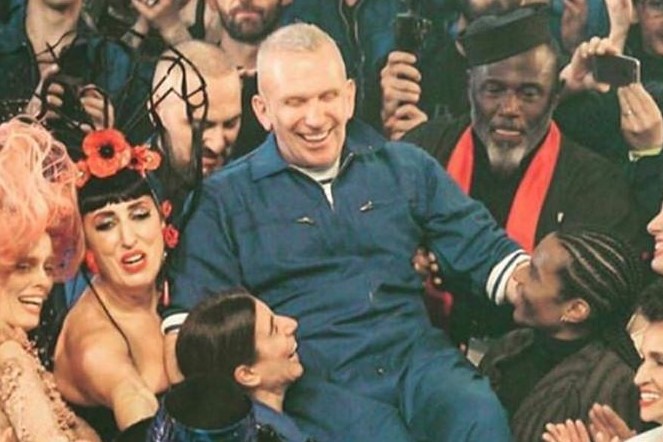 Way back in 2014, Jean Paul Gaultier amped up the camp – as he so often does – and staged a Dancing With The Stars-inspired runway show. As models Coco Rocha channelled Grease’s Danny Zuko and Karlie Kloss demonstrated her ballet skills, a panel of judges including longtime JPG muse Rossy de Palma held up cards reading ‘OMFG!’ if they impressed, or ‘boring’ and ‘no thanks’ if they failed to.

Now, the designer has revealed he’s set to become a judge on the French version of the glittering American TV show. First detailed in a report by media outlet news.in-24.com in late June, the appointment was confirmed by the subversive designer in an interview with The Guardian this weekend.

“This wasn’t a childhood dream, but it reminds me of my father who taught me to dance,” Gaultier explained. “I love The Voice too, but thankfully nobody asks me to sing, even if I once made a record and it only sold 30,000 copies. I was happy with the publicity, but in truth it wasn’t great.” The record in question was 1988 electro house-inflected single “How To Do That”, and we’d beg to differ on it not being great – the track is a banger and features a baby Naomi Campbell in the video.

Of course, it’s not the first time Gaultier has hit television screens. Back in the early 90s, the designer co-hosted the wild, late-night variety show that was Eurotrash alongside Antoine de Caunes. The two then returned for an uproarious Brexit special in 2016.

Now he’s taking a backseat at his eponymous house, inviting a new gen of designers to take the reins each season, further TV appearances could be on the cards. Watch this space, we guess, and if you’re in France, your television screen when Dancing With The Stars season 11 airs later this year.

Revisit JPG’s Les Marins collection in the gallery below.